There are only three Shadows known by name. Ler Rhan and Black Ferah are "generals" in the service of Bael'Zharon. They are extremely powerful entities that do not seem to fully exist in our world. Instead, they send aspects of themselves into Dereth.[1]

You hear a childish voice say, "Long ago there were five, but now there are three. They will have their revenge."[3]

The invasion of Ler Rhan's forces started in A'mun Desert. Unlike Ferah, he elected to directly establish his headquarters in the Spires. After he was slain there, he moved on to the plains in the Aluvian-settled regions of Dereth. Again, he was tracked and defeated. Once more he moved, into the Spire found in the Blackmire Swamp. Once more he fell.

The conquered Spires held keys to the Nexus Crystal, which was defended by an army of Undead and Shadows (See als Nexus Shadow Armor Quest). [4]

To overcome this, Ferah and Ler Rhan assumed human form once more and contacted the Isparians they abducted and tested before. Together with one of them, Vidorian, they swept into the dungeon, drove the defenders back and shattered the Shard of the Herald. With a shriek that could be heard across worlds, Ilservian Palacost was freed. [2][7]

After the Fourth Sending

During the Hidden In Shadows patch, a Shadow Spire appeared near the town of Tou-Tou.[18][19] This was the starting point of a new wave of Shadow activity, led by Ler Rhan and Black Ferah, both now in their true forms, and not as aspects.[20][21] Though it seems their goal is to bring back Bael'Zharon to the surface, this was merely a test of theories.[22]. In fact, they are collecting information on the ley lines around Tou-Tou in the hope of bringing the Hopeslayer on for a prolonged time, to defeat Isin Dule and to spread the corruption all over Dereth.[23][24] The Shadows started the attack Tou-Tou and many of the townsfolk decide to evacuate.[25][26] The siege of Tou-Tou succeeded and the town, and the inhabitants that stayed behind, was corrupted and pulled toward the shadow[27]. The remaining townspeople were turned into shadows, be it weak and unwilling.[28][29] The event culminated in the reappearance of the Hope-Slayer, and its subsequent defeat by the combined forces of Asheron, Isin Dule, the golem Deewain and even Ulgrim left his favorite drinking spot to give a wack or two with his sword. The forces of Ler Rhan and Black Ferah retreated, though the town of Tou-Tou remains devastated and occupied by the shadow forces and their leaders will keep trying to collect crystals to keep trying to summon the Hopeslayer.[30][31]

Ler Rhan himself used to not appear as such ingame. Instead, he sent aspects of himself into the world. Destroying these aspects does not destroy Ler Rhan himself.[32] [33]

Ler Rhan Shadow aspects appear in various quests and he was one of two leaders (along with the A Shadow of Black Ferah) that led the Shadow invasions during the Thorns of the Hopeslayer event.[34]

Video on Youtube: Shard of the Herald / Liberation of Bael'Zharon on Thistledown

Translation of the Pulsating Bony Lump 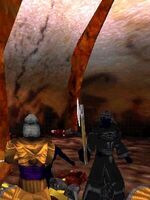 Ler Rhan in the Head of a Shadow Spire during the 2000 Shadow Invasion. 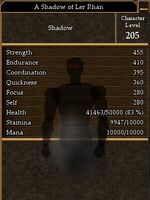 A Shadow of Ler Rhan in the Orphanage Wing. 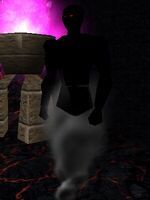 Ler Rhan NPC in the The Shadows dungeon.
Add a photo to this gallery

Retrieved from "https://asheron.fandom.com/wiki/Ler_Rhan?oldid=453003"
Community content is available under CC-BY-SA unless otherwise noted.