An Ornate Bone Key is needed to open the portal to this tomb. See Lord Mhoire Quest for details. The exit portal comes out in the cave at 64.7S 43.9W in Graveyard. 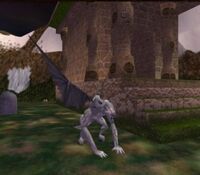 Two identical statues that open portal when key is used.

The NPC that appears and gives reward when spoken to. 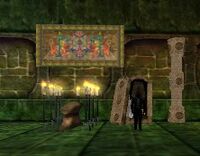 Looting Mhoire's Sealed Vault
Add a photo to this gallery

Retrieved from "https://asheron.fandom.com/wiki/Lord_Mhoire%27s_Tomb?oldid=436211"
Community content is available under CC-BY-SA unless otherwise noted.