Magic refers to the use of any of the five schools of magic.

School of the Arm

War magic is an offensive magic school, it allows you to cast spells that damage the target. This includes arcs, rings, walls, bolts, volleys and blast spells.

War magic uses the Essence of Strife contained within the Foci of Strife.

School of the Heart

Life magic allows you to cast spells that heal and protect the target, but the school also includes spells that lower protections and drain health, stamina and mana.

Life magic uses the Essence of Verdancy contained within the Foci of Verdancy.

School of the Left Hand

School of the Right Hand

Item magic allows you to cast spells that affect an item's properties. This includes spells that alter the damage, speed, modifiers of a weapon, the armor level (AL) of armor and the lockpick resistance of doors and chests. Item magic also allows you to utilise portal magic and tie to, recall to and summon Portals. In addition, you can tie and recall to Lifestones using this magic school.

Item magic uses the Essence of Artifice contained within the Foci of Artifice.

School of the Shadow

Void magic uses the Essence of Shadow contained within the Foci of Shadow.

Allows you to summon creatures to attack your foes.

Learning spells is mostly achieved through the use of Scrolls, however, some unique spells are also taught by NPCs.

There are currently 8 levels of spell. The first six can be found as Loot or purchased from the Scriveners while the seventh level is only generated by the loot system or trophy system as is the case with unique spells like wall and rings. The final and most powerful level 8 (VIII) spell scrolls are created through Spell Research using special components found in the highest tier of loot.

Prior to the Castling event when it was removed, all level I - VI spells could be learned using the previous spell research system. This system used between 5-8 Spell Components in the following order: Scarab, Taper 1, Herb, Taper 2, Powder, Potion Taper 3, Talisman. The second and third tapers were different for each player.

The system was designed with the intention that players would learn spells but keep the components secret. One incentive behind this was the effects on the spell economy.

The spell economy was a unique feature of Asheron's Call that determined the effectiveness of spells depending on the use of the spell on a server-wide and personal scale. If a spell was not used often, the power of the spell increased above the normal level.

If a spell was over used, either by the whole server or by casting the spell in rapid time, the effectiveness of the spell decreased.

Unfortunately, players soon found a way to easily work out the personal tapers using program liks "Split Pea". This was exacerbated with various fansites documenting the remaining part of the spell formulas. 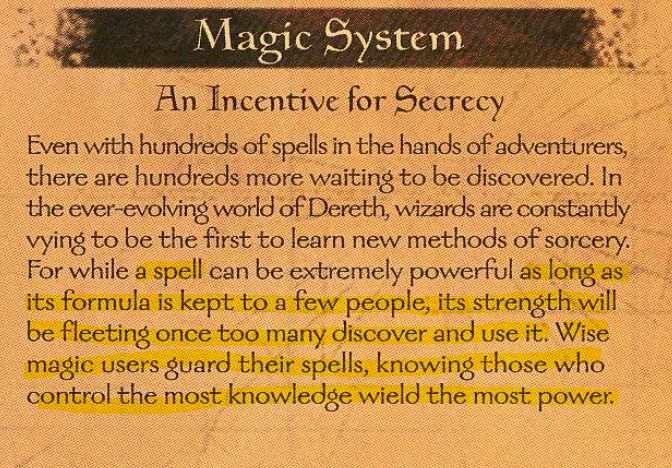 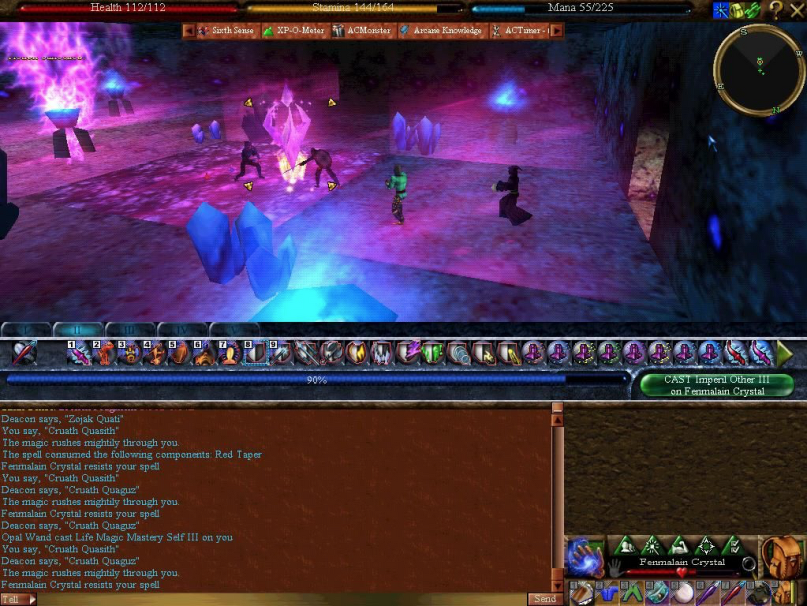 One example of a spell that was over used was Flame Bolt V that degraded the spell badly. To counter this at the time, Turbine added the spell Dark Flame as part of a quest.

After the spell research system was removed it became much simpler to cast spells with the new system using Foci. Spell foci take a pack slot and remove the need for most of the old components. To cast a spell you simply need a foci for the school of magic, the scarab for the level of spell you wish to cast and a number of Prismatic Tapers which replace the old tapers including the two personal tapers.

It is possible to earn Augmentations that remove the need to carry the foci freeing up many pack slots. It is also possible to use the old system of components by not using the foci. This is useful for players that only wish to cast a few spells.

Magic mode, or spellcasting mode, is active when you're wielding any Magic Caster (also known as a casting device) and you click the

button on the interface. The spell casting panel then appears which consists of 8 spell bar tabs for holding spells from your spell book and the cast button to cast the selected spell on the target. Many casting devices have a built in spell which is found to the left of the spell bar. The first 9 spells in any tab are numbered which can be quickly cast using the keyboard.

You can switch tabs by clicking on them, or by pressing the <insert> and <page up> keys to cycle through the eight tabs. These are the same keys used to increase / decrease attack power / accuracy in the other combat panels.

You can switch spells by clicking on them, or by pressing the <delete> and <page down> keys to cycle through them. These are the same keys used to switch between low attack / medium attack / high attack in the other combat panels.

Magic casters or casting devices are wielded by mages to cast the spells that they have learned.

When an item is used to cast a spell against a creature, the Spellcraft of the item is similarly compared against the magic resist skill of the creature.

Spellcraft is also used when applying Silk to an item to remove allegiance rank, the new arcane lore requirement will be equal to the spellcraft of the item.

The Paths of Destruction

Retrieved from "https://asheron.fandom.com/wiki/Magic?oldid=464172"
Community content is available under CC-BY-SA unless otherwise noted.