The portal to the town appeared during the Unfinished Business event. It was home to some researchers and Shopkeepers. During the Who Watches the Virindi? event, two Virindi guests appeared in the bar, making the Shopkeepers feel uncomfortable.

The town lies in ruins since the Old Ghosts event.
The Town portal at 10.6S, 17.1E is still there.
Two human NPCs simply disappeared (Jinmi the Alchemist and Kaywin the Machinist), but there are 2 corpses near the Test Portal (Marcus and Wren, the Portal Researchers?) and corpses where the Shopkeepers Rubin (Barkeep), Jurraf (Jeweler), Aishi (Smith) and Ali (Bowyer), Khamal (Groceries), and Malak (Archmage) were.
Of the two Virindi guests, Jean and Luc, there is no trace...
The Test Portal is still there, but doesn't function.

You try to enter the portal but there is no effect.
The portal seems unstable.

Also the Stabilizing Machine is still there. The door is now barricaded, but you can access it by going up near the Test Portal, and shift-jump down into a small gap in the floor.
On the floor, there is a Scrap of Paper (Attuned and Bonded).

Portal Research and Traveling back in Time

During the Picking up the Pieces event, Resonant Portals became a random spawn on the landscape of the West Direlands (white portal). If you picked up a Scrap of Paper, you can travel back in time before the destruction of Mar'uun. All the NPCs are there, and you will have the choice to tell them about the upcoming events. (see Portal Space Research for details). 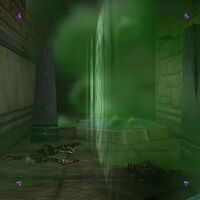 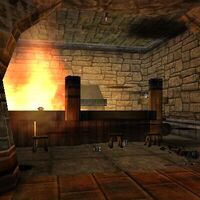 The remains of the bar in Mar'uun
Add a photo to this gallery
Retrieved from "https://asheron.fandom.com/wiki/Mar%27uun?oldid=455501"
Community content is available under CC-BY-SA unless otherwise noted.