Introduced in the The Slumbering Giant event, the Marketplace is the main point of commerce in the world of Dereth. Players come here to trade, buy goods from the marketplace bots in the vendor stalls and sometimes hold auctions.

MMD Trade Notes are regularly used as the exchange medium for trade bots at the Marketplace.

Getting to the Marketplace

Type @marketplace, @mp or use the portal in the south hall of the Town Network.

Occassionly creatures and lore characters are spawned in the marketplace as part of a live event, even Lord Asheron has even been known to make an appearance.

Wings of the Marketplace

Each of the four wings of the marketplace has a number of stalls where players can sell their wares. Trade bots should not be placed in the main foyer.

This room is used for Portal Bots.

The NW room is for Tinkering bots.

These are the main trading rooms where many Trade Bots are usually found.

Correct usage of the rooms

Envoys have the authority to move players that do not follow the marketplace guidelines.[1]

One of the four trading rooms in the Marketplace 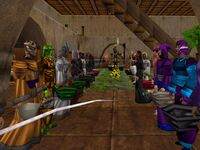 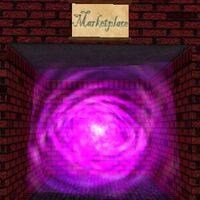 The Marketplace portal in the Town Network