In the volcanic half-light within Mount Lethe, the stones began to move. A few, glowing like clumps of embers, trembled and clattered across the floor. Then larger pieces began to stir, twisting and swirling upwards like leaves in an autumn zephyr. The blackened pieces of basalt slowly assumed a hulking shape -- a purpose.

"Golem!" a female voice called, from down the corridor. 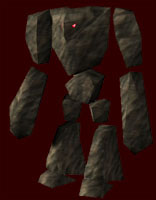 Vaguely humanoid in form, the shifting stones pounded down the magma tube, throwing their deep red ember-light on the walls, and on two small figures bathed in sweat and soot. "Hendac!" the woman called, hurling a smoky gray nabut to her companion. As it sailed through the scorching heat, its trail of frost melted to a rain that sizzled and steamed on the charred rocks. The man, Hendac the Watcher, caught the weapon handily, spinning it into a classic Aluvian quarterstaff guard position.

The Golem drew back and launched a fist of churning black gravel at the woman. She sidestepped and flinched away from its broiling mass. The near miss bathed her in bloody light. Her companion swept in behind the Golem, striking again and again, to little effect.

Frantically, the man snapped his fingers, then hand-signed to his companion, Jenavere. She nodded, and they both sprinted back up the magma tube. The Golem thundered down the corridor behind them, gouts of flame erupting between its component stones.

They led it to one of the swinging rope bridges erected by Lord Cambarth when he had attempted to mine the mountain. There, Hendac spun and faced down the beast, striking it ineffectually as Jena circled around behind it. The golem, angered, moved to the edge of the bridge to smash him.

Hendac ducked, and swing at the rocks that passed for legs. Jena charged and shoved it from behind, yelping in pain as her hands struck its semi-molten form. In a long stream of stones and gravel, it tumbled over the low hemp railing, hitting the bubbling magma below with a series of thick plops.

"Dumb as a pile of rocks," Jenavere panted, wincing as Hendac wrapped her blistered hands in a clean strip of cloth. "Thanks be to the Poet." The Golem stared up at them, flame belching from its eyes and mouth, and roared.

He motioned for her to follow him, and walked into the cavern at the far end of the bridge, away from the suffocating heat wafting up from the magma pools below. She followed, taking a last, thoughtful look at the Golem splashing in the lava.

Hendac sat in the center of the cavern, and shrugged out of his backpack. She sat across from him and placed her throbbing hands, palms up, on her knees. He pulled a small wand and a few reagents out of the pack. "What are you doing?" she asked. He glanced up, and gestured with the wand at her hands. "Ah." He had taken up the study of life magic lately, and seemed to be intending a healing spell.

As he puttered, she looked back at the bridge, which swayed gently in the hot air rising from the magma. "Hendac?" she asked. "What do you know about Golems?"

He looked up with a smile. She returned it, having come to recognize the subtle gleam in his eye; this was evidently one of the many topics he had been collecting stories about. He set aside the wand, dug into his pack again, and pulled out a battered journal. He flipped through it a moment, then laid it open across her lap. The pages were filled with notes, in elegantly scripted Roulean.

"You know," she said, "in our lands, there are men and women who devote their entire lives to making their words a thing of beauty to the eye as well as the ear. Some work for decades to produce a single manuscript of the Alamakhaida." Hendac shrugged noncommittally.

"I only say," she continued, "because you have the skill of one of them." At that, his soot-smudged cheeks showed a blush. His finger traced in the dirt, "Do a lot of writing."

She laughed fondly at his discomfort, and began to read as he went about preparing his healing spell.

Golems are magically animated "clumps" of material. They are found in greater variety than any other creature in Dereth. Examples have been reported of mud, water, wood, limestone, sandstone, copper, granite, iron, obsidian, and, of course, magma.

Celcynd of Rithwic claims to have seen one of another type. He told me once that he had managed to swim through the strong sea-currents to reach the island off the coast of Eastham. He found a large castle there, of the same High Empyrean design as Neydisa near Mount Esper, which is commonly held to date from the Age of Lore. The gates to this island castle were guarded by Golems made of clear gemstone. The light caught within their bodies refracted into rainbows -- quite lovely, he said. They promptly sent him back to the Lifestone.

However, inebriated as usual, he also claimed a family of Tremendous Monougas lived under the Obsidian Span, demanding a toll from all who would cross. The account of the Golem may be merely another drunken exaggeration. No one else has managed to swim to this island, and the so-called "Diamond Golem" has never been reported by any reliable source.

The sages have had many heated discussions about the Empyrean use of Golems. While it is unlikely that anything short of an explanation from Asheron himself will settle the issue, one theory seems to have gained grudging acceptance by all schools of thought. That is the "agent" thesis. This holds that the Empyrean used Golems as simple, expendable laborers.

A good deal of documentary evidence supports this. Recently recovered texts, dating from the last war with the Shadows, detail the use of Magma Golems as guardians and workers in Empyrean pyreal forges. These forges seem to have been built solely within the heart of active volcanoes. Mount Esper, in the north of Osteth, was at one time such a foundry. (There is some scant evidence that Neydisa Castle was used as a treasury for new pyreal.) It seems clear that the Magma Golem was needed to work the metal -- sometimes within its own semi-molten form, sometimes in liquid lava.

Other recovered texts, more obscure in source, mention that the creation of Mud Golems was a frequent activity of Empyrean juveniles -- their equivalent of making mud pies. Mud Golems would be used for large-scale games of "toy soldiers," or for help with chores (though probably not cleaning). Perhaps these simple anecdotes alone serve to emphasize the enormous gap between the knowledge of the ancient Empyrean and our own cultures. The average child of Yalain could create creatures beyond the ability of our most learned mages.

Other known uses of Golems are legion. Golems have been found in ancient mines, kitchens, and storehouses, doing menial and difficult labor that the Empyrean apparently considered beneath them. Judging by the singular scratches on the stonework, it seems that Golem labor was used to help construct the great lighthouse near Tou-Tou. Golems do not appear to have been used as soldiers, possibly because of their susceptibility to a mass disenchantment spell that the Empyrean are known to have possessed. Most often, Golems appear as simple guardians, keeping visitors clear of areas considered dangerous. It is curious that Golems often resort to aggressive behavior -- perhaps a symptom of decay in their vital enchantments, a kind of senility, if you will.

The wide variety of Golem materials simply reflects the diversity of environments in which they were created. Empyrean enchanters apparently made use of the tools at hand. Thus Granite Golems tend to appear in the Linvak and Lost Wish mountains, Sandstone Golems in the A'mun desert, Wood Golems in the Tiofor Woods, and so forth. Further, there is some indication that when a Golem's enchantment begins to ebb low, it will return to the place in which it "feels most at home." For example, Mud Golems seek out swampy areas, and Limestone Golems will return to caverns.

Destruction of vast numbers of Golems has revealed very little about their method of creation. Over ninety percent of their mass is undifferentiated, inert material. Only two Golem "organs," if such a term may be used, seem to exist. The first of these is the Golem Heart. This appears to be a core enchanted object, around which the rest of the creature is assembled. The second organ is the mote of magically forged pyreal alloy. While intact pyreal motes have only recently been recovered, I have little doubt that they have existed all along. Gondibyr Langarl, the archmage of Rithwic, believes that these motes may have been what passed for a mind in the creature. Instructions the Golem was expected to carry out were magically imprinted upon the pyreal mote.

It seems likely that, in addition to taking commands directly from an enchanter, Golems were designed to absorb instructions from enchanted items and places. The basis for this theory (championed by Shikiru Nohon of Hebian-to) lies in the numerous Golem "shrines" scattered across Dereth, often in remote locations. These "shrines" can appear as anything from simple standing stones to statuary. Golems cluster around these artifacts expectantly, as if awaiting orders.

Perhaps these "shrines" once contained instructions, in the form of pattern enchantments? Surely the small mote that serves as a Golem's mind can only hold a finite set of instructions. Is it not logical, argues Shikiru, that these shrines could be enchanted with more elaborate series of commands? When a Golem completed one task, it returned to the shrine for another. When the enchantments on the shrines expired, the Golems were bereft of direction. Yet, after all these centuries, they still patiently stand, awaiting orders.

As a final rumination, it is interesting to note that most Golems appear to have eyes and a mouth. These are often quite obvious. Possibly the most striking Golem visage is that of the Wood Golem. This entity resembles the classic daemon-tree Aluvian mothers use in stories to keep children from wandering too far into the trackless woods. However, one need only look at the shimmering, featureless form of the Water Golem to prove that these are merely decorative. The eyeless Water Golem can track its victims well enough. It seems clear that these features are merely there for the comfort (or perhaps discomfort) of the humanoid creatures that once interacted with them.

Unfortunately, the secrets of Empyrean Demiurgy, or Golem enchantment, continue to evade discovery. Perhaps one day, the people of Ispar will learn this art for themselves. I do wonder, however, what the result would be. With servants that can be made to do the vilest, most dangerous work, would we grow decadent? Or would these creatures serve to free us for the higher, finer pursuits of art and learning, as they did the Empyrean?

Golems are said to be remnants of Empyrean magic, left behind as guardians for their strongholds, both above and below ground. Now that the Empyrean have vanished, however, they have become mindless automatons, attacking anything that comes near. They stand seven to eight feet tall, and are made of many materials, including earth, wood, water, ice, stone and metal. They bash with their club-like limbs, and some also attack with magic.

Dangerous to Lethal, depending on material 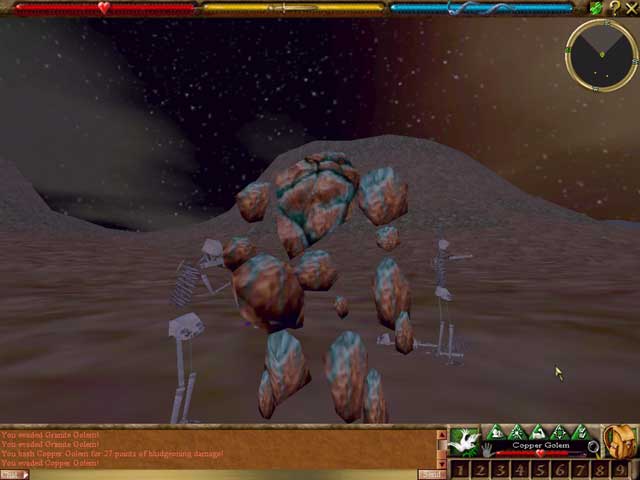 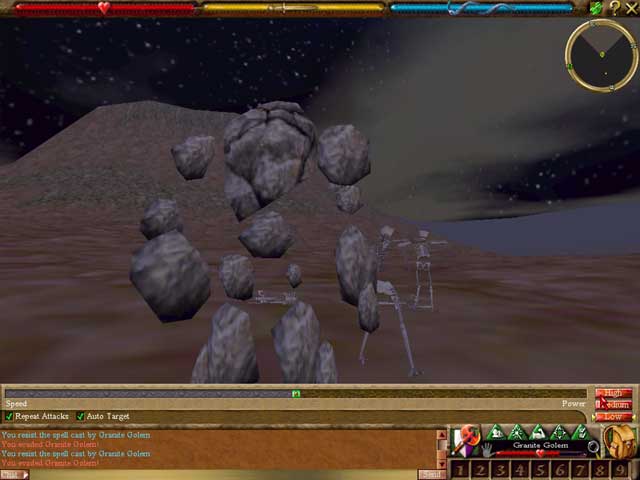 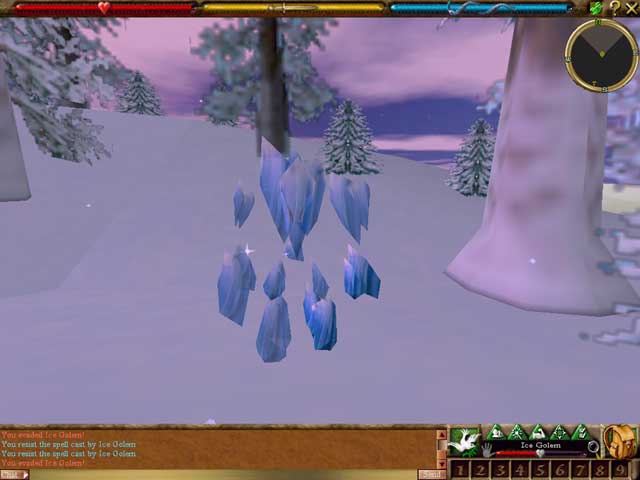 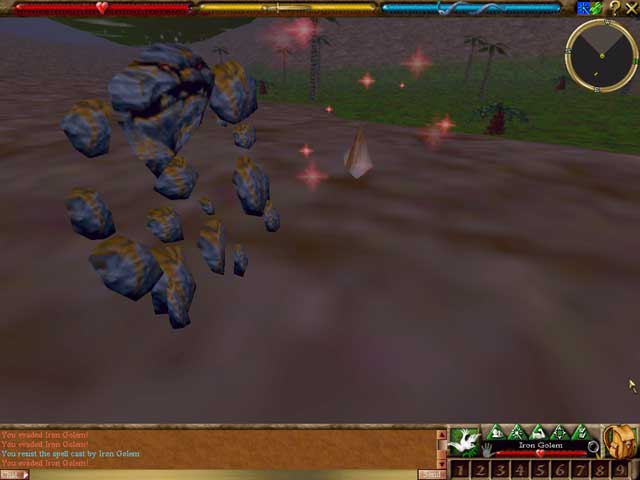 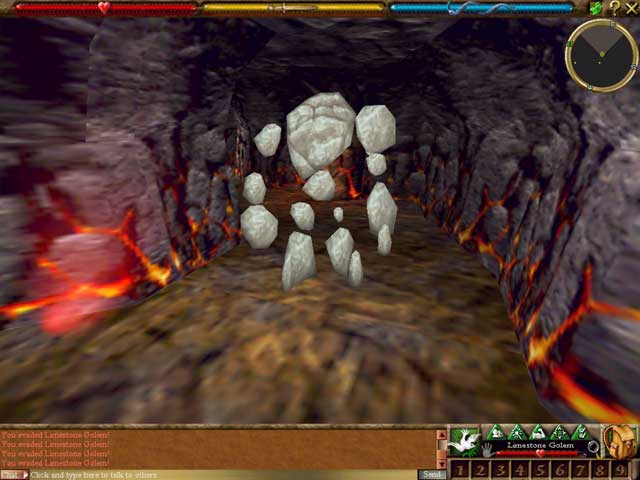 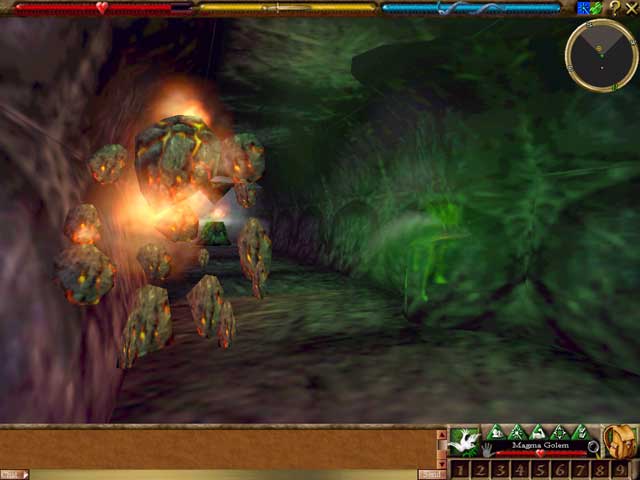 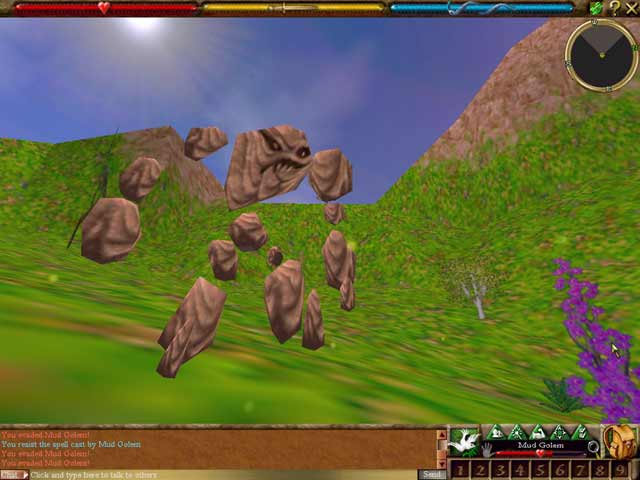 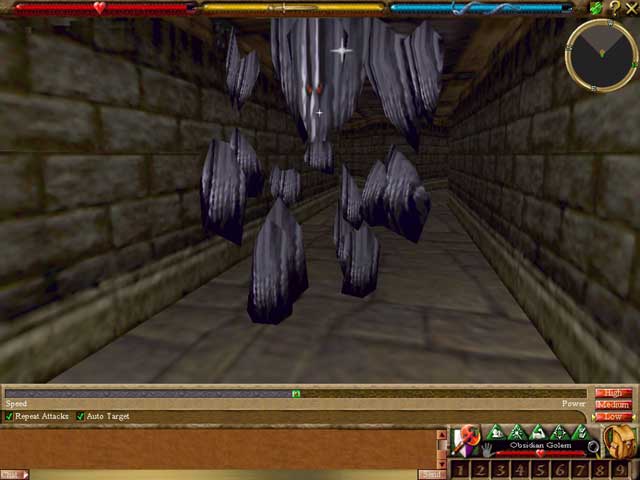 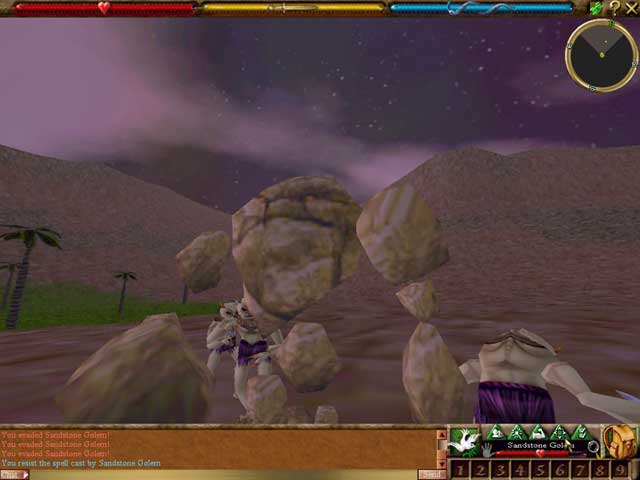 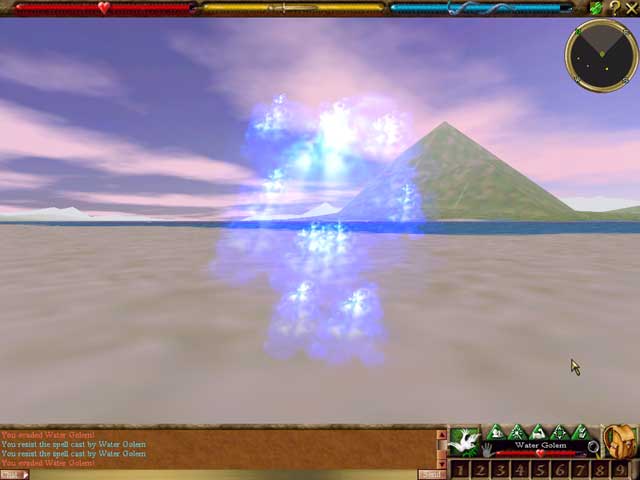 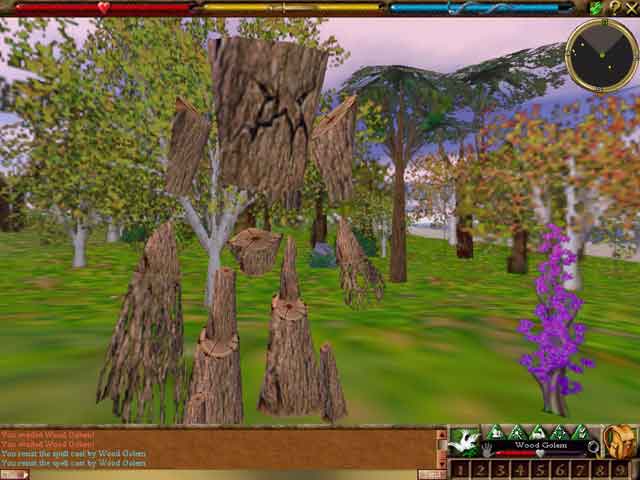 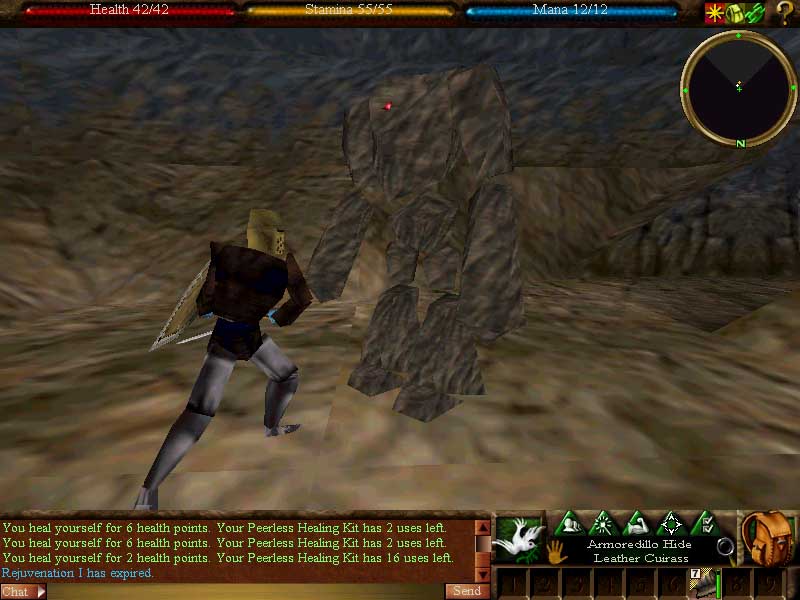 Retrieved from "https://asheron.fandom.com/wiki/Microsoft_Zone_Archive/Asheron%27s_Lore/The_Golems?oldid=437148"
Community content is available under CC-BY-SA unless otherwise noted.