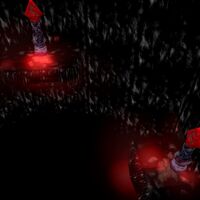 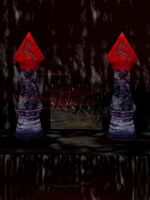 The Gateway to Grael's Chamber. 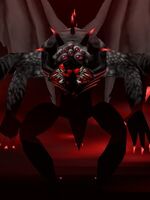 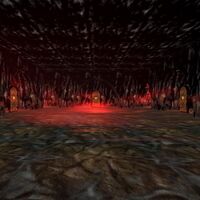 Varetha touches your forehead, sending a dark chill throughout your body.

Varetha tells you, "My Lord, Isin Dule, has sent me to aid you in the containing of the Mukkir Aspect of Grael. Though it will be a difficult thing to accomplish, this can be done. To do so, however, we will need to gather the proper tools."

Varetha tells you, "There is a Shadow Stone, created in Black Ferah's experiments, that should do nicely. I have managed to locate the stone, but so have Grael's followers. Gather this stone for me, and I should be able to modify it to hold Grael's Mukkir Aspect for a time. I will attune you to the defenses of the location..."

Varetha tells you, "You will find the stone at 39.1 S, 60.1 W. Go there and retrieve the stone. While you are gone, I will prepare what I need to modify it."

You give Varetha Experimental Shadow Stone.

Varetha tells you, "The "Great Experiment", the Shadow Stone Black Ferah worked so hard upon. This will do nicely."

Varetha tells you, "I will reconfigure the magical matrix in this to contain Grael's Mukkir Aspect. While I do this, travel to 37.2 S, 67.0 W. I have managed to track the Aspect to that location. Hunt it down and kill it. I'll take care of the rest."

Handing in Shard of the Black Spear

You give Varetha Shard of the Black Spear.

Varetha tells you, "Now, this will make a trophy to be remembered."

Shadow Power fills the shattered remnants of the Black Spear, which reforms completely.

Varetha tells you, "It is no longer a weapon of destruction, as it once was. It'd be too dangerous to leave in that state. However, the power of it is strong, and I've augmented it a bit myself. Place it somewhere secure, like those homes you build for your people, and you should be able to tap its power there."

Varetha tells you, "Bring the Token to the representative your Monarchs have set out to guide this task. They wished to be informed when one aided in Grael's defeat. I'm sure they have some sort of reward for you as well."

Varetha tells you, "You do not wish such a trophy? Very well, I can reward you in other ways, and pass this along to my Lord, who will no doubt be amused by it."

Hoshar ibn Jalaq tells you, "I salute you as a true hero, friend. I thank you on behalf of Dereth and on behalf of my master for the great thing you have done."

Retrieved from "https://asheron.fandom.com/wiki/Mukkir_Aspect_of_Grael_Quest?oldid=445948"
Community content is available under CC-BY-SA unless otherwise noted.