Welcome to all you new players!

If you've never played an Online RPG before (known as a MMORPG for Massive Multiplayer Online Role Playing Game) you are in for a new experience. Unlike other computer games, MMORPGs are played with others from around the world. It combines game play with great online socializing. This guide is designed to help you get started in the world of Dereth.

Even if you have played MMORPGs before, we suggest reading through this guide as well. Although MMORPGs have many similarities, in many ways Asheron's Call is different than the rest. You'll have to throw away your expectations and approach this from a new mindset.

If you have the itching to get in and play, you'll need a few things. The first would be an account. You can purchase a new account at The Turbine Store. After you have your account, you'll need to download the Client from the official Asheron's Call site.

After you have established your account and downloaded and installed the client, you'll need to pick a server. This part is easiest if you already know someone that plays. If you don't though, visit the New Players Forum on Turbine's website, or if you're daring enough, you can browse the various official Server Forums. There are generally players, just like you, looking for information on the servers. There aren't restrictions on playing more than one server, so if you don't like the server you picked, you can always try another one.

Okay, we'll get this out of the way first as it is often the first thing people notice when loading the game.

Asheron's Call graphics are based on an older engine that does not handle the high details many new games have. This engine was upgraded with the Throne of Destiny expansion, but still does not have the awe-inspiring glory of newer game titles.

However, even though the resolution may not be as great as other games, there are distinct advantages.

Buildings on the landscape act like real buildings. They have working doors, there is no 'zoning' in and out of a building. Windows are truly windows and you can watch what is going on outside through them.

The world has no zones or instances (the Colosseum being the only exception). You can run from one end of Dereth to the other, the mountains you see in the distance you can travel to, no matter how far away they are.

In addition, these graphics allow for a much higher concentration of monsters, allowing you to be a true hero and fight entire swarms and emerge victorious.

These touches add a form of realism you don't get in other games. As you play you can find yourself immersed in Dereth as completely as you can any other MMORPG.

The gameplay of AC is unlike any other MMORPG, and that is where AC shines.

AC does not have character classes as many other MMORPGs do. There is no 'healer' class, no 'tank' class, no 'attack' class.

With AC you have complete control of the design of your character, allowing you to mix and match skills from any of the traditional class based systems into a character that is truly your own design. The bad news is with this freedom, you can create some extraordinarily bad designs. However, even these designs can succeed, and some players take pride in taking a so-called unplayable design to very high levels.

When grouping for quests, player mixes of skills allow for much greater freedom in creating your groups. A group does not have to consist of a healer, a tank, a leader and damage specialist. Instead, parts of these roles can be taken by anyone in the group.

This also allows for a greater ability to 'solo'. Very little of the content in AC cannot be soloed by a powerful enough character.

And Turbine has been doing this for over twelve years. There is a considerable amount of things to see and do, so you won't run out soon.

AC is unique among MMORPGs in that it allows the use of 3rd party utilities to enhance or design AC gameplay to match your form of enjoyment.

3rd party utilities are available to help you in looting, crafting, managing your stuffs, buffing, finding your way around the world, keeping track of your quest timers and many other useful additions.

Also 3rd party utilities can be used to set up a 'bot' which is an unattended character that can provide services to the community. Bot's provide trading in the AC Marketplace, Bot's provide buffs, portals to far away locations, and services of every kind.

However, this power comes with a downside. Some people use bots to level while they are away from the computer. This is commonly called a UCM for Unattended Combat Macro. UCMs are against the AC rules, and can lead to the character account being banned. However, it is difficult to tell the difference between an attended combat macro (which is legal) and an unattended one. In AC you WILL find macros fighting.

Instead, you play a super character, faster than a speeding bullet and able to leap tall buildings at a single bound. The run skill allows for faster travel than mounts in other games. You don't have to buy anything special to use it, just add points to your quickness and run skills. With portals to far areas dotting the landscape, and the ability to run as fast as a Volkswagen going up a mountain pass, you will find you don't need a mount.

A complete list of in-depth articles on a wide variety of game mechanics can be found here.

You can also jump straight to Connor the Craftmaster's Asheron's Call: A Complete Video Documentary by clicking here.

"Asheron's Call continues to evolve in all aspects, and the magic system is no different! With the November 2010 event, From Darkness, Light, a new school of magic was introduced known as Void Magic! This is a mastery of a darker form of magic, which focuses on Damage over time." 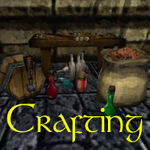 Color coordinating your outfit just became a lot easier! Using the cooking and alchemy skills along with special dye plants found only in the wilds of Dereth, you can create dyes of various colors to dye your armor and clothing. But beware -- don't expect it to be easy! If your skills are not up to the task, you could permanently damage your armor!

The salvaging skill allows you to salvage any items you don't want into useful materials; for example, salvaging a steel dericost sword into a bag of steel. These salvaged materials are collected until you have a certain quantity and are then used to enhance the abilities of another item using the four tinkering skills: armor tinkering, item tinkering, magic item tinkering and weapon tinkering.