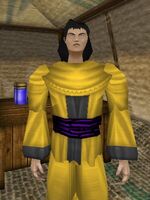 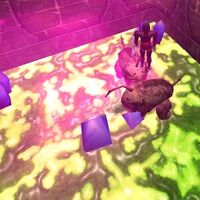 Apostate Nexus Gateway, in 2nd Acid Pit
Add a photo to this gallery

Ned the Clever tells you, "Excellent! You can help me! We in the Arcanum think the Virindi Apostates are up to no good, but we're not sure what they're doing. It all seems to be involved with this rare Aetherium metal that's been recently discovered. We think they are stockpiling great quantities of the ore, but we do not know what they intend to do with it. We need a doughty adventurer like yourself to seek out a deposit under their control, and plant a tracking device in their stores..."

Ned the Clever tells you, "We have traced some suspicious energy patterns to the old Nexus discovered during the days of Bael'Zharon's rise. This facility may hold some clue to the location of a Virindi Apostate storehouse. Seek out the Nexus portal in the Direlands at 40.1S, 79.2W, investigate the facility, and see if you can find a way from there to the Apostate deposits. Once there, you can place this Aetheric resonator within the deposit, and I will be able to monitor their activities for the Arcanum."

Talking to Ned the Clever after completing the quest

Ned the Clever tells you, "Congratulations! I've already been able to see, through my instruments, that you have successfully infiltrated the Apostate Nexus and placed my resonator in their deposit of purified Aetherium. This is exactly what I needed to keep track of the Apostates' activities for the Arcanum. The realm is grateful. Allow me to reward you..."

Ned the Clever tells you, "If you picked up a mask from the master of that facility, you can give it to me and I'll make it useable for a human."

You give Ned the Clever Apostate Master's Broken Mask.

Ned the Clever tells you, "Yes, well done, this must have belonged to the Master of the Apostate Nexus. It only takes a few alterations, and a realignment of the energy lattice contained therein..."

Ned the Clever tells you, "If you don't like that, or find it less than useful, you can give it back to me in exchange for some practical training."

You allow Ned the Clever to examine your Nexus Crawler's Mask.

Ned the Clever tells you, "Very well. If I were you I'd prefer to hold on to such a remarkable souvenir of my exploits, but I suppose you get a lot more excitement than I do."

You hand over 1 of your Nexus Crawler's Masks.

You carefully place the Aetheric Resonator on the deposit, and there is a brief, harmonic chime, as if to let you know that your task is done.

Retrieved from "https://asheron.fandom.com/wiki/Nexus_Crawl?oldid=437879"
Community content is available under CC-BY-SA unless otherwise noted.