Nuhmudira is a Milantean mage[1], though she passes herself as Gharu'ndim and on Ispar she was a scholar of Tirethas[2]. She studied ancient Falatacot rituals and is rumored to practice Blood Magic.[3][4] Together with Candeth Martine, she is one of the few who have grasped the higher concepts of magic, and put them into use.[5]

She played a major role during the Elements of Revenge and A Time of Chaos Story Arcs.

The Arcanum and Nuhmudira's experiments with Blood Magic

She was once leader of The Arcanum and member of Elysa's Royal Council[11][12].

As leader of the Arcanum she researched and discovered the secrets of the Lifestones.[13][14] She learned that the lifestones of Dereth, while seeming to be a boon granting eternal life to Isparians, in reality sustained the life of the Empyreans trapped in portal space. Nuhmudira learned how to sever the connection between an Isparian soul and the Empyrean lifestones, and learned to create her own lifestones, for the benefit of allied Isparians only.[15] A few of these style Lifestones came into being in for example the Olthoi North and Marae Lassel.[16] [2] [17]. She was also responsible for establishing housing and the housing settlements.[1][11][18]. Last but not least, The Arcanum under her leadership discovered the secret to redistribute skills and attributes.[19]

She has a strong distrust of Asheron and all Empyreans, fearing that if the Yalaini return it will be the end of the Isparians.[2][10][20][14][15] To that end, she practices Blood Magic and other Empyrean magics in hopes to provide Isparians with the means to defend against Empyreans.[10][21]

She is also responsible for creating house barriers to shield the Isparians from the Empyrean, though Gaerlan proved immune to these, so even the sanctity and safety of being within one's home had become unsure. [22]

The distrust is mutual: Asheron thinks Nuhmudira plays with primal forces that are far beyond her frame to contain and that she is mainly searching for power. [23]

Nuhmudira planned to make a school in Arwic supposedly in the currently empty villas seen on the east side of town. However, her plans apparently never came to fruition because after many years no school has yet to open and the buildings remain empty.[Citation Needed]

She abandoned her work with The Arcanum, though still supports their activities.[14][24]

She broke with the Council[15] or was removed from the Council after being accused of using dark magics.[25] Not all Isparians believe these accusations though, especially those with strong ties to the Arcanum.[26] and many are thankful for what she did for the Isparian people.[27][28] Others strongly oppose her, and damned her for the sacrifices made.[29]

It is unknown when she first started experimenting with Blood Magic, but during the Elements of Revenge Story Arc, she becomes enticed with it more and more, and crosses lines she knew there was no way back. She was inspired by one of the books she found during her travels, to which she refers as the "Book of Blood", Hanaureli Rezau in the Yalaini language, Inikshai Ardun in Dericostian.[21]

She has since tried to undermine Elysa and Asheron, even attempting to kill[34] them, in order to gain control of the Isparians on Dereth.[Citation Needed] For the assassination of Elysa, she hired Oswald.[35][36]

A Time of Chaos

Though Nuhmudira was seldom seen in Dereth after the disappearance of the Ancient Olthoi Queen, later events show she is still alive and active.

The Temple of Enlightenment

The Temple of Forgetfulness 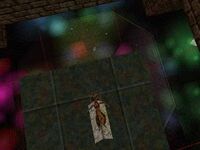 Nuhmudira captured in the Oubliette during the Betrayal patch. 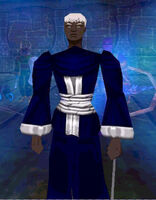 Nuhmudira during the defeat of Gaerlan

Nuhmudira as spotted in Xi Ru's Library; Soul stone Quest during On Bended Knee patch.
Add a photo to this gallery

Retrieved from "https://asheron.fandom.com/wiki/Nuhmudira?oldid=457975"
Community content is available under CC-BY-SA unless otherwise noted.