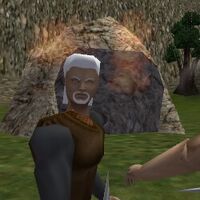 Rebel Hideout
Add a photo to this gallery

Jedeth Eckhart tells you, "Those Viamontian scum are up to something! Our scouts have reported a large gathering of soldiers, but they don't seem to be doing anything. We need someone to sneak into their midst to find out what their plan is. Use the Back Tunnel to sneak in and find out what they are up to."

You allow Dar Rell to examine your Grazer Bug.

Dar Rell panics when you show him the Grazer Bug!

Dar Rell tells you, "I got captured and they made me swallow it! I didn't have a choice. Please believe me. Don't show this to Jedeth. Please..."

You give Jedeth Eckhart Grazer Bug.

Startled, Jedeth Eckhart drops the Grazer Bug to the ground.

Once freed of its confines, the Grazer Bug quickly makes its way over to Dar Rell.

Jedeth Eckhart tells you, "That's a Grazer Bug! My old man told me about them. They have the uncanny ability to track down their mate no matter how far they are separated."

Jedeth Eckhart yells, "Dar Rell! You have its mate, don't you? That's why it's trying to make its way over to you. And that's how the Viamontians planned to find our hideout. But why, Dar Rell? We trusted you. You were our friend. How could you betray us?"

Dar Rell steps forward and stomps on the Grazer Bug, crushing it. "They didn't give me a choice! I had to swallow it! But Tlosk has stolen its mate...they can't track us now!"

Jedeth Eckhart responds, "I'll deal with you later, Dar Rell. Thanks for your help, <Player>."

Retrieved from "https://asheron.fandom.com/wiki/Of_Trust_and_Betrayal?oldid=445822"
Community content is available under CC-BY-SA unless otherwise noted.