This point of interest maybe more commonly known as the "Lin Lich Tower" even though it has been updated and no longer contains any Liches.

The Old Keep is a tower lit with green flames that sits on the side of a mountain northwest of the town of Lin. It is only accessible via a nearby portal at 52.8S 69.1E. The tower is guarded by two Obsidian Golems who flank the door. At the Base of the tower are several Sewer Rats. One the stairs is a Shadow Wisp, and and at the top of the tower are a few Dark Revenants who guard two Runed Chests. One chest is unlocked (tier 4 Loot) while the other requires lockpick skill (diff. 200, tier 4 Loot) to open. To leave the keep you can take a portal outside the tower which will deposit you on the other side of the mountain. 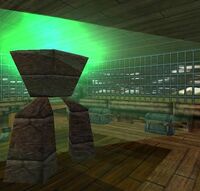 Top of the Old Keep
Add a photo to this gallery

Retrieved from "https://asheron.fandom.com/wiki/Old_Keep?oldid=435572"
Community content is available under CC-BY-SA unless otherwise noted.