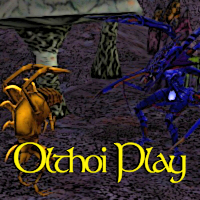 Introduced in the 11th anniversary update, Olthoi Play is a system designed to allow players to jump right into the higher level Player vs. Player action without the need to spend vast amounts of time leveling and collecting gear. The downside is that Olthoi Play is highly restricted.

For more information on the two types of playable Olthoi, including stats and tactics, see:

The Olthoi appear to be from a completely new queen. All other Olthoi are hostile to Olthoi Players. Where this queen came from and why she has appeared has not yet been revealed.

Message in login if not at the Queen

You have returned to the Olthoi Queen to serve the hive.

Drop unwanted items into the acid pit to destroy them.

Olthoi may not pass through this portal!

Attempting to enter portal with vitae:

You may not pass through this portal while Vitae weakens you!

Attempting to create a fellowship

As a mindless engine of destruction an Olthoi cannot join a fellowship!

The Olthoi only have an allegiance to the Olthoi Queen!

Attempting to recruit an olthoi into a fellowship

The Olthoi's hunger for destruction is too great to understand a request for fellowship.

Attempting to swear allegiance to an olthoi

<Olthoi> calls out searching for other Olthoi.
<Olthoi> casts about looking for victims.
<Olthoi> clicks its pincers together in anticipation of destruction.
<Olthoi> cries out to indicate to its kin that prey is near.
<Olthoi> hisses some kind of threat.
<Olthoi> lets out a maddening series of clicks and hisses.
<Olthoi> prepares to hunt enemies of the queen.
<Olthoi> screeches in a horrible fashion.
<Olthoi> surveys the area as acid drips from its mandibles.