Note: One person with Lockpick is required to complete this part of the quest.

Warning: Make sure that the designated killer is NOT one of the people handing in Bells.

Warning: You will need a Lockpicker to get through this dungeon normally. If one is not present, you must get one quickly. 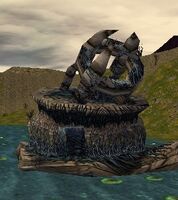 West Dam Structure with one the bell part chests. 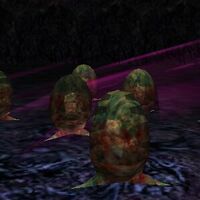 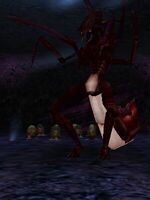 The Olthoi Queen
Add a photo to this gallery

Aun Kahmaula tells you, "How interesting. This is an instrument used by your people? Tonk says 'music is all and everlasting'

The crashing of the great pyreal bell reverberates through the ground. The menhir stones crack and break!

Aun Kahmaula tells you, "No! What have you done? Villian!

Aun Kahmaula tells you, "I must go and warn the xuta.

Aun Gehaua tells you, "How foolish do you think us, <Player Name>? We know your evil name, yes, we do. You have done your damage to our efforts just recently!

"Begone, and take your hideous bell with you. Even if you return in three weeks, it shall be too soon for me.

Retrieved from "https://asheron.fandom.com/wiki/Olthoi_Queen_Quest?oldid=451350"
Community content is available under CC-BY-SA unless otherwise noted.