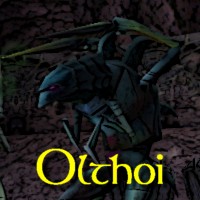 In the darkest depths of Marescent Plateau on far Marae Lassel, the party of the bold [Player Name] has slain the young queen of the island's Olthoi brood! As one, the Olthoi swarms recoil from her final burst of terror, and slowly begin to withdraw back into their hives.
Olthoi Queen's death is preceded by a sharp, stabbing pain!

[Player Name] has killed one of the Queen's guardians!

"As the olthoi crumbles onto the floor, a voice speaks softly in your mind, 'You may have destroyed one, but there are many to replace it."

"Pain explodes in your mind as the Olthoi falls to the ground, its carapace glistening in the dim light."

"A laughter somewhere between human and virindi echoes from within the olthoi's chitinous shell."

"Silence floods into your mind, but is quickly replaced by a maddening laughter."

"A flash of light pulls you from your body. Lush trees grace a peaceful valley and you find yourself holding your child in your arms, with your wife by your side. The vision fades into a blood red haze as quickly as it had begun."

The Young Olthoi Queen screams and falls. A acrid smell fills the room and the door on the far wall squelches open.

Banished Olthoi chitters as it flicks its pincers across eachother.

As [Player Name] strikes the final blow against the Paradox-touched Olthoi Queen, a piercing howl fills your mind. Amidst the horrifying noise in your skull, you hear the following words, "You may have stopped me for a time, but you will never be rid of me. I am no simple insect that can be driven off or so simply destroyed. My Master will rid the world of you pathetic meatbags, and we will usher a new age into this reality."

Retrieved from "https://asheron.fandom.com/wiki/Olthoi_Utterances?oldid=261460"
Community content is available under CC-BY-SA unless otherwise noted.