The only town on the tropical island of Aphus Lassel at 2.3N, 95.4E, introduced during The Iron Coast.
The town is built on platforms.
Many human occupants are strangely influenced by the monkey character of the island, and seem to have lost all capabilities for human speech.
Both the Mayor and the Town Criers are Tuskers.

Not too far to the Tusker Emporium!

Note (Order of the Raven Hand)

Creatures that are commonly found in the area surrounding Oolutanga's Refuge. 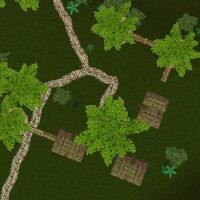 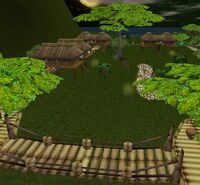 The platforms of Oolutanga's Refuge
Community content is available under CC-BY-SA unless otherwise noted.