Oswald is an Aluvian assassin and secret mentor of Prince Borelean Strathelar. Like Nuhmudira, he has the power to give True Death (i.e. the person does not reappear at a Lifestone).[1] He is described as having extraordinary green eyes and blond hair [2], and he prefers to dress in green.

Oswald studied to become a master assassin, with for example Selaina the Subtle.[3] He served as an assassin, together with MacTavish in the war between Aluvia and Viamont on Ispar.[4] He arrived on Dereth after fleeing from Viamontian trackers [5] who were hunting him down after his attempted assassination of King Varicci I of Viamont.[2] Oswald arrived on the Halaetan Isles, where it would seem all the portals to Auberean that appear in Viamontian lands send you. Oswald took a great interest in anything which had to do with the Ruschk.[6] Later, after the Varicci II took the Royal Army through the portals, Oswald was captured and held in the Viamontian Royal Prison[7][8][9][5]. He easily escaped, which angered the Viamontian King greatly.[10] Selaina the Subtle received a contract to track down and kill Oswald.[3]

Oswald was able to freely pass through the Fiun Barrier which had kept Dereth and the Halaetan Islands divided.[5] It is unknown how he was able to do this, however, this may explain why Oswald's hidden lair in the Fir Tree is on the coast closest to the Halaetans.

On Dereth, Oswald was hired for many jobs. He killed Gertarh the Banderling who lived in the Thieves' Den near Eastham.[11][12][13][14] He was hired by either Devana bint Hamudi or the Shagar Zharala to end the misery of her father Hamud ibn Rafik who had turned into a Shadow.[Citation Needed] [15][16] And most notably, Oswald killed the mayor of Ayan Baqur, Jaleh al-Thani[17][18] He was hired first by another employer, then by Nuhmudira to assassinate High Queen Elysa Strathelar.[19][20] He altered the magic of the shrines (Altar of Bael'Zharon and Altar of Asheron) in such a way, that neither Bael'zharon nor Asheron were tied to the souls of Isparians; instead, it will go to his first employer (players were since then able to go PK Lite).[19] He did attempt to kill Elysa[21] but did not succeed, Elysa fell in a coma of which she later recovered. Both Nuhmudira and Elysa were not his best friends after this.[22][23]

Other deeds presumably attempted with more or less success was the stealing of the Bandit Shield [24], sharing his knowledge on how to make Spikes [25], the stealing of the Lens of Filinuvekta by one of his followers, Benedino[26]. Somewhere during his time in Dereth, he and Nuhmudira fell out, and she is trying to get hold of him.[4]

During The War of Blood and Shadow (the Grael arc) Oswald was made out to be less of a villain, when he became the secret mentor of Borelean Strathelar[27] [28] [29] and helped the people of New Aluvia stand up against Varicci II. Later Oswald brought the Ordina Rossu Morta and Whispering Blade together to fight against Grael.[30][31]

Oswald send his Followers to capture and interrogate one of the altered Moarsmen during the T'thuun Story Arc, and sends his findings to, amongst others, Lord Rytheran.[32]

He meets up again with Selaina the Subtle, their dialog ending with an attempt of Selaina to kill him, and her losing the fight.[3] From the teaser it also becomes clear that Oswald is more and more willing to work with followers instead of alone.

These followers include Sabritha and Adso.[33][32]

He is also implied in the attempted assassination of Queen Elysa, being the one who prophesied this attempt.[34]

Note to a generous host

Page from a Journal

Many Humans are found in locations associated with Oswald or his followers, such as 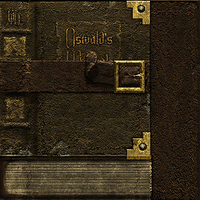 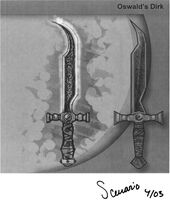 Oswald's Dirk
Add a photo to this gallery

Retrieved from "https://asheron.fandom.com/wiki/Oswald?oldid=458022"
Community content is available under CC-BY-SA unless otherwise noted.