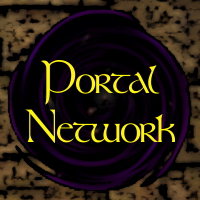 The Portal Network refers to the multitude of portals in towns and dungeons linking together various locations in Dereth.

Town Network - This is the primary way to get from town to town. It has a portal to nearly every town inside, and almost every town (even those not included in the network) has a portal to here. Notable Towns that DO NOT have a portal in the Town Network include Ayan Baqur, Bandit Castle, Candeth Keep, Crater Lake Village, and Wai Jhou.

Desert March - There are two locations for this dungeon. One just south of Danby's Outpost, and the other west of Al-Jalima on the inner sea. It contains portals to:

Whispering Blade/Rossu Morta Chapterhouses - After completing a series of quests you can gain access to one of these dungeons. They contain portals to:

Abandoned Mine (retired) - Also known as Subway, Sub, or Hub. It was previously a large portal hub. During the Shifting Gears event nearly every portal was removed. It now only has a portal to the Underground City and to the surface. Previously, it had contained portals to Arwic, Cragstone, Glenden Wood, Hebian-To, Holtburg, Mayoi, Qalaba'r, Rithwic, Samsur, Shoushi, Yaraq, and Zaikhal.

Jungle Shadows (retired) - Also known as Jungle Sub or New Sub. It was previously a large portal hub. During the Shifting Gears event nearly every portal was removed. It now only has a portal to the North Direlands and to the South Direlands. Previously, it had contained portals to Baishi, Eastham, Glenden Wood, Hebian-To, Neydisa Castle, North Direlands, Plateau Village, South Direlands, Tufa, and Zaikhal.

Adventurer's Haven (retired) - It was previously a small portal hub, containing portals to Lytelthorpe, Samsur, and Yanshi. During the Shifting Gears event these portals were removed, however, a Town Network portal was added in.

Abandoned Arena/Colosseum - Besides the two dungeons, you can also find portals to:

Ancient Town - Besides being the location of the Dungeon of Tatters, you can also find portals to:

Starter Towns (retired) - in a previous update, Holtburg, Shoushi, and Yaraq were given portals to numerous other towns. When Sanamar was introduced, it also contained many portals. During the Shifting Gears event these portals were all removed, and each town was given a portal to the Town Network instead.

Hidden Valley (retired) - An isolated valley with a portal to the Desert Ridge Border. It previously had portals to Holtburg and Mayoi as well.

Wilderness Fort (retired) - Previously had portals to Hebian-To and Zaikhal. Both have been removed.

For a long time, there were three major portal loops connecting many towns. The expansion packs also brought additional portal connections. During the Shifting Gears event, the Town Network was introduced and nearly every existing portal to a town was destroyed.

The following portals survived the destruction, and are still functioning properly.

Also known as the newbie loop, this retired loop connected the nine original nexus arrival towns. There were also a few outskirt portals that could be considered part of the loop.

Also known as the capital loop, this semi-retired loop connected the three capital cities and Qalaba'r.

Also known as the Arwic loop, this retired loop connected the various non-starter and non-capital towns.

These retired portals connected the cities of Osteth with Marae Lassel.

Retrieved from "https://asheron.fandom.com/wiki/Portal_Network?oldid=471049"
Community content is available under CC-BY-SA unless otherwise noted.