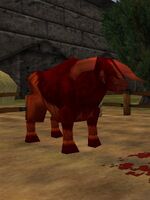 The Red Bull of Sanamar 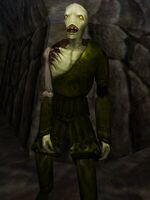 Atavistic Fiun
Add a photo to this gallery

Grand Knight tells you, "Well, it seems you may be worthy of royal service after all. Looking for more work, are you? There is one sensitive mission which you could undertake for us..."

Grand Knight tells you, "The Red Bull of Sanamar, which you see at the center of town, has been sick for some time. We don't know how to cure it! The only man who might is the bull's old caretaker, a man named Lascare. Well, he left town some time ago. All we know is that he lives off by himself on a lonely hilltop on the island to the northeast. Seek him out, please, and figure out a way to cure the bull!"

Old Lascare tells you, "Oh, so the old Grand Knight sent you here, eh? I figured that brute would need my help eventually. That bull has an ugly secret - so ugly I dare not speak it, ha ha! The answer to your problems lies in the Cannibal Caverns, 88.0N, 58.5W. You can figure the rest out if you read my journal."

Old Lascare tells you, "Oh, mother! I swore I'd never touch one of those nasty things again. You can just take that directly to the Grand Knight himself for all I care."

Grand Knight tells you, "Ah, this... heart is the key to the bull's health? Very well. This gives me much to think on. I thank you for your service. You are not the first to bloody your hands in the King's service."

Grand Knight gives you Medallion of the Red Bull.

Grand Knight tells you, "If you seek to serve the King further, speak with Garmasi."

Handing in Hero of Sanamar Token to the Grand Knight

You give Grand Knight Hero of Sanamar Token.

Grand Knight tells you, "Your dedication to our King is commendable, and greatly to be praised. I will make it known that you have served us well."

Grand Knight tells you, "You have proven yourself to me. Should you seek to further serve your King, speak with Garmasi. He will know of your loyalty."

Retrieved from "https://asheron.fandom.com/wiki/Red_Bull_of_Sanamar_Quest?oldid=435229"
Community content is available under CC-BY-SA unless otherwise noted.