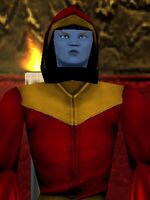 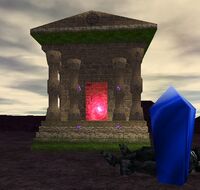 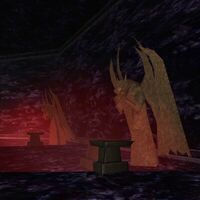 Lower Levels
Add a photo to this gallery

Melaverre tells you, "Ah, I'm glad you came to me. I can see that you have done some dangerous and unorthodox things in the service of our King. I would ask you to do more. In the Obsidian Plains, at 68.4 S, 66.1 W, there is an ancient temple that the Order of the Raven Hand has been using as some site of worship. It is called the Black Spear Temple."

Melaverre tells you, "Within the depths of the temple complex, there is a pedestal which bears the seal of the Elder Spirits that serve the "Living Darkness" the Raven Hand is so infatuated with. The seal is broken, but I have the missing fragment. I would like you to take it and explore the levels that the cultists have not yet been able to penetrate."

Melaverre tells you, "I seek a tablet of ancient knowledge, which has been split into three pieces. The three pieces are guarded by ancient Shadows known as Shonossoar, Kaihoatai, and Parfarrail. Take the fragments from these creatures of Shadow, assemble the tablet, and bring it to me."

Melaverre tells you, "There is one thing for you to remember. I know that there are ways of concealing one's service to the King. Just know that this is a sensitive enough task that there will be no way that your involvement can be forgotten by any simple raid on the Royal Archives. However, if you do this for me, I will grant you full membership in the Ordina Rossu Morta."

Melaverre tells you, "So you've picked up the Parfarrail Fragment, have you? Combine it with the other two fragments and give me the complete tablet, if you would be so kind."

The Elder Spirits Seal seems to acknowledge your presence when you press the missing fragment into it. It teleports you to the lower levels of the Black Spear Temple...

You get the sense that, in the future, simply touching the completed seal will be enough to activate the seal's magic and transport you back into the lower levels of the temple.

You give Melaverre Elder Spirits Tablet.

Melaverre tells you, "A fascinating record of the mysterious Grael. Count Dardante and our King are both very interested. I thank you for your service."

Melaverre tells you, "You've done some work for me already, haven't you? Sorry, I don't have any more deep pits of eldritch magic to push you into at the moment."

Retrieved from "https://asheron.fandom.com/wiki/Rossu_Morta_Chapterhouse_Access?oldid=456867"
Community content is available under CC-BY-SA unless otherwise noted.