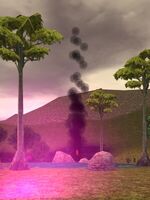 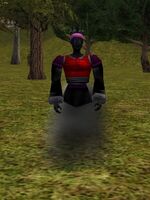 Shadow Captain
Add a photo to this gallery

Isin Dule tells you, "This may be one of our last chances to hold back the shadow advances on the town of Tou-Tou. Go there and destroy several of the Shadow Vortex which have moved in around the edges of the town."

Isin Dule tells you, "Excellent work soldier. I ask you to inform Asheron both of what is happening in Tou-Tou and the feat you achieved there. I think the time for action has arrived."

Asheron tells you, "The shadows are surrounding Tou-Tou and beginning an assault?"
Asheron tells you, "Isin Dule is correct. We must form a plan for action and end the madness that has gone on for far too long."
You've earned 350,000,000 experience.
You've earned 30,000 Luminance.
You have been awarded the title of "Bright Knight".
Asheron gives you Fortified Mana Forge Key.

Isin Dule tells you, "We managed to slow down the shadow assault on Tou-Tou. I fear it is not enough and that a much larger action is needed."

Retrieved from "https://asheron.fandom.com/wiki/Shadow_Assault?oldid=357940"
Community content is available under CC-BY-SA unless otherwise noted.