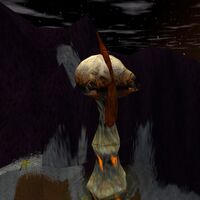 A view from atop the Shadow Spire 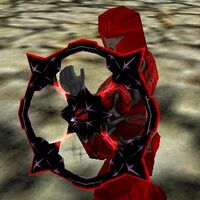 Shield of Isin Dule
Add a photo to this gallery

Handing in Fleshy Lump for Translation

You give Bretself the Translator Fleshy Lump.

Bretself the Translator tells you, "Ugh! Another of these lumps? Even worse, this ones still squirming! Still... this is fascinating."

Bretself the Translator tells you, "This seems to be orders to the Shadows under Isin Dule's command. Oh my, he raised a Shadow Spire? He's ordering his forces to stop some High Archon of the Raven Hand. Here, take a look."

Handing in Shield of Isin Dule

You give Sarkin Killcrane Shield of Isin Dule.

Killcrane handles the shield with apprehension and disgust.

Sarkin Killcrane tells you, "Hmm... I've seen some of the tougher shadows armed with these things recently. Thank you for bringing me this, I'll destroy it before it spreads the shadow taint. Here, take this in exchange."

Retrieved from "https://asheron.fandom.com/wiki/Shield_of_Isin_Dule_Quest?oldid=432002"
Community content is available under CC-BY-SA unless otherwise noted.