The history of the Sho is intertwined with their mythology. For more information on the Sho creation story, see Religions and Beliefs. The legendary founder of the Sho Nation was Shou-Jen Rian. According to their beliefs, after dishonoring the Dragon of Power, Shou-Jen Rian and his kinsmen were driven west and south by the Dragon, who burned their crops and destroyed their villages.[1][2] The people were driven southwest for years, all the way to the sea.[1][2] There, the Shou-Jen family established a kingdom and named it after the Dragon (Ryujii) to placate the Elder.[3] However, six families instead sailed across the sea and founded their own kingdoms upon islands named after the Firebird (Iiwah) and the Unicorn (Chiran-tou).[1][2][3]

Given that this is a fantasy setting, it is entirely possible that the Sho creation story and their Elder spirits are real beings and the story of Shou-Jen Rian is true. However, if interpreting their mythology from a more secular point of view, it is possible that the Dragon destroying their crops and home and driving them to the sea is a metaphor for a stronger nation expanding their territory by claiming the old Sho homelands. If the Sho Nation was founded some time prior to 286 RC, the Roulean Empire could certainly be the rival nation. Another idea, presented on Warcry's Crossroads of Dereth's Sho introduction article is that the Dragon was a metaphor for volcanic activity.

For centuries after the founding of the three kingdoms warlords feuded amongst themselves, mostly in the name of one of the Elder spirits or another.[3]

Around 800 years ago (approximately 486 RC) Jojii received a vision from Unicorn of Grace on how to reach Paradise by following four primary precepts: Humility, Discipline, Detachment and Compassion.[3] [5] This new religion, called Jojiism, would gradually become the guiding school of thought for the Sho.[3] For more on Jojiism, see Religions and Beliefs.

No more than 500 years ago (approximately 793 RC or later) the Tanada Clan of Nanjou Shou-Jen arose in the midst of a minor territorial war between the warlords Fansin Hanu and Kosu Jainan.[6]

Unification and the Kou Dynasty

200 years ago (approximately 1086 RC), the Emperor Kou rose to power in Ryujii at the age of fifteen. Kou united the Sho people under his banner. Iiwah he took by force, invading with a massive fleet; Chiran-tou he took by peace, marrying the daughter of its ruler and moving his throne there. Then, he quickly began reforming Jojiism and encouraging its spread. Thus began the Kou dynasty, and the Sho people were at last unified under one Throne and one vision.[3]

At a very approximate date of 1176 RC (based on average human generational span and the ages of Kou and Kou-an) Empress Kou-an, great granddaughter of the Emperor Kou, ascended to the Throne of the Sho Empire at the age of fifteen. Guided by Jojiism, Kou-an in turn guided and refined the Sho culture. During her reign, Kou-an sen the Thousand Emissaries to the other nations of the Iron Sea, including Gharu'n, Milantos, Viamont, and Aluvia. Kou-an also decreed that the common trade language of the other nations, Roulean, be taught to all Sho.[7]

As late as 1286 RC, the Sho still enjoyed the stability brought by the Kou Dynasty. Monasteries and temples provided a foundation of education and training for the populace.[3] The old rivalries between the three Elders and their associated Jojiist principles still remained. There were also rumors of secret groups who despise both Jojiism and the Kou Dynasty, and are loyal only to the Dragon.[3] Trade had begun with the two closest kingdoms, the Gharu'ndim and the Milantos, and the Sho were growing increasingly aware of the vast lands beyond their borders.[3]

In 1292 RC, the Gharu'ndim realm was shrinking as Viamontians aggressively expanded their territories. Some in the Sho Nation worried the Viamontians may target their lands next.[8]

The Sho believe in a divine creator referred to as the One.[1][2][3] The One created the three Elders to rule the world: the Unicorn of Grace, the Firebird of Splendor, and the Dragon of Power. Humans were created as servants to the Unicorn of Grace.[3] But mankind forcibly rose above his station and seized the domain that Grace once ruled.[1][2][3] Grace left the world and was hidden, Splendor fled and became elusive, and the Dragon of Power became a treacherous ally to man.[3] This action by man caused the pillars of Heaven to shake so hard that many evil beasts, once imprisoned by the Elders in the darkness, to break free of their chains and come rushing back to the world of mankind.[1][2] Of these creatures the most feared was the Wind Serpent, son of the Dragon of Power. He had seven heads and rode upon the wind, breathing fire that consumed entire villages.[1][2]

The details of what came next are debated (see The Shou-Jen and the Founding of Ryuujii Version 1 and Version 2) but what is clear is that Shou-Jen Rian, aided by the the Unicorn and Firebird, was able to defeat the Wind Serpent.[1][2] The Dragon, seeing the people rejoicing and the remains of his son, was enraged and leaped down from Heaven. Though forbidden to destroy them, he drove the people across the land, burning their crops, destroying their homes, and forcing them to move on, until mankind was driven all the way to the sea.[1][2][3] There, the Shou-Jen family and others settled and named their kingdom after the Dragon (Ryujii) to placate the Elder. However, six families instead built boats, sailed away, and founded the island nations of Iiwah and Chiran-tou, named after the Firebird and Unicorn.[1][2][3]

For centuries after the founding the three kingdoms, the three Elder Spirits dominated the beliefs of the Sho. Around 800 years ago a man named Jojii received a vision from the Unicorn of Grace on how to reach Paradise.[3][5] In his vision, he saw four stones around him in a square: a stone named Humility was in front of him. A stone named Discipline was to his right. To his left was a stone named Detachment. And behind him was a stone called Compassion.[5] On this vision, Jojii said,

"I knew then that Humility must always be before me; that Discipline was my weapon to cleave through all foes and vices, and that Detachment was my shield against all hurts and sufferings. And ever supporting me and following me was Compassion, which should be the only footprint that I should leave behind in life. These Four Stones I saw as the foundations of living, the stones that pave the way to our return to Paradise." - Jojii Zhen Gai Comments on the Teachings of Jojii

After his vision, Jojii began to teach the Four Stones of Humility, Discipline, Detachment and Compassion. This new religion, called Jojiism, gradually became the guiding school of thought for the Sho.[3]

From Winter Festivals from Ispar:

South and west of the Naqut, over the tall mountains, the Sho lands brace as both the water and the air grow cold. The weather can shift with little warning from clear skies to torrential, wind-driven rains that leave towns flooded and in ruins, and on the coldest days, snow falls from the sky and blankets the ground in a thin layer of white. Some say the first pure snow of the year is the funeral ashes of the Wind Dragon, slain so long ago by Shou-Jen.

During this time, the Imperial Capital traditionally threw open its gates, and the last of the fresh harvest was brought forth, after the bulk had been pickled, smoked, or dried for the rest of the winter. But seeing that many used the time purely for culinary excess, Emperor Kou, the founder of the Kou Dynasty, saw that wisdom's touch was needed. Believing that the Four Stones of discipline, compassion, detachment, and humility were the true foods of the soul, he decreed the celebrations must ultimately honor the Elder Spirits and the teachings of Jojii, for without truth, even the best of harvests means very little. He also decreed that the temples must release their students and acolytes during the celebration, not only to reunite families but also to permit them to glean wisdom from their students' studies.

So the temples and monasteries across the land now release their students and acolytes, who travel homeward amidst the first snowflakes to meet their families, share some of their hard-won knowledge, and enjoy days of feasting. Travelers began carrying lanterns and torches, and the waiting towns would welcome them home with a myriad of bright paper lanterns. Children too young for the monasteries especially seem to enjoy the season, when their elder siblings return home and all can engage in the festivities together. Some towns have gone so far as to host parades, celebrating the return of loved ones and another year of abundance. Thus, the Festival of Lights, starting at first as a gluttonous spectacle, grew moderated by wisdom, and came to be the celebration it now is.

The Sho lands are bright and bustling places during this season, with small groups of torchbearers walking the roads. For the Sho, the Festival of Lights is a time to accomplish great things, and reach out to assist one's neighbors.

The Sho culture is based on East Asian cultures, in particular the cultures of Japan and China.

Numerous names for Sho places and items are Japanese or Chinese. The word Ono is Japanese for "axe".[9] The word Yoroi comes from Ō-Yoroi, Japanese for "great armor".[10] The name of the forest town of Lin most likely comes from the Chinese name Lin, meaning "forest".[11]

The Sho naming system of having the surname first and the given name last is based on the naming traditions of China,[12] Japan,[13] Korea,[14] and Vietnam.[15]

The four houses of the Tanada Clan of Nanjou Shou-Jen, Air, Earth, Water, and Fire, correspond to four of the five elements of Japanese philosophy and the four great elements of Buddhism.

Ken-Gou and the Curse of Attachment

On the Four Stones and Three Elders

Reflections of a Portal

Stone of the Firebird (Text)

The Collected Writings of Jhong Mi

The Journal of Nandesu Ka

The Rise and Fall of the Tanada

The Story of Ben Ten and Yanshi

The Story of Koji and the Dragon of Power

The Story of Koji's Sword

The Dragon of Power
Weapons

Jade Medallion of the Depths

Medallion of the Sword 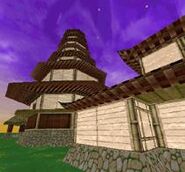 Retrieved from "https://asheron.fandom.com/wiki/Sho_Lore?oldid=469981"
Community content is available under CC-BY-SA unless otherwise noted.