Caul Island is a huge, circular island to the Southwest of Dereth.
It's been the center of many story arcs and events.
All over the island, different items associated with Bael'Zharon and Aerbax can be found, such as Virindi Spires, a Shadow Spire and Stone Statue of Bael'Zharon.
Also, the island is full of all sorts of Empyrean Ruins.

For a Map of Caul, with all important information, see: here.

Caul is a large area, there are two ridges that bisect the island, viewed from overhead it looks like an X in a circle, with a small crater area in the very middle. The spawns are fairly well separated by these ridges. For creature information see each specific area on the Caul.

Originally, the island was accessible by invitation only. Bael'Zharon called Monarchs to run "The Gauntlet", an invitation only quest to receive an Atlan Shadow Stone and the title of Dark Master. See the text of Samuel, Former Guardian.

The island used to be a good hunting ground for mages. The thick, and fast, spawn consisted mainly of Tuskers, Virindi and Hollow Minions.

During the Mirror, Mirror event, Caul got a huge overhaul. The events before, many smaller incidents hinted at something going on deep down under Caul.
It turned out, Aerbax was conducting experiments, with help of the Shadow Ler Rhan, and the result was a radical change.
The once Virindi dominated island now shows a strong Shadow influence.

Not only did the island physically change (ridges becoming higher and more pronounced, and the plateau in the middle changed into a crater, Caulcano), but also the flora, and for all, the fauna.
The basic structure of the island was however still recognizable. Also, quite a few typical Caul landscape items, such as the Statues of Bael'Zharon, reappeared.
Many new creatures appeared on the landscape, which, never very green, has gotten a basic ash colour, with strangely deformed trees.
Also, some of the older dungeon got relocated (for example Caul Asylum), even to outside the island (for example, Aerbax's Holding), and new dungeons and POIs were introduced.

There are 2 ways to get to Singularity Caul:
First method:
Go into the Singularity Bore dungeon and run North (Up) to the top where there is a portal usable by those flagged to use it.

Katar of the Fallen

Spear of the Fallen

Bow of the Fallen

Dirk of the Fallen

Crossbow of the Fallen

The spawns are fairly well separated by the ridges. For creature information see each specific area:

This was the way the island looked before Aerbax nuked it. 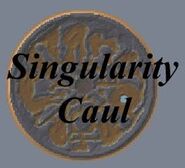 An overview of Caul 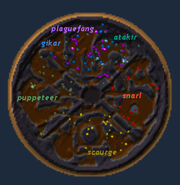 An overview of Caul back in the days

How the Caul once looked 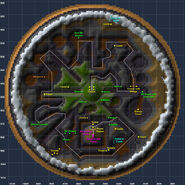