The Souia-Vey are an Isparian heritage group that live on the high steppes[1] south of Milantos and east/northeast of Gharu'n on the edge of the known world.[1] For now, their region has been free of portals to Dereth.

Very little is known about the history of the Souia-Vey.

One legend speaks of a battle between a king of Milantos and a hero of Souia-Vey. As the legend goes, long ago the Milantan sorcerer-king Karuz had come to the conclusion that the secret of eternal life lay in the blood of the of Souia-Vey. At his direction, Milantan sorcerers had been kidnapping villagers of neighboring Souia-Vey to perform foul rituals upon them. The Souia-Vey were largely helpless until the arrival of the hero Brador. Armed with a sword that seemed to fend off sorcery, Brador alone was able to repel the Milantan incursions. Frustrated by Brador's defense of the Souia-Vey, Karuz decided to end Brador's interference personally, and brought forth his own terrible weapon to do battle with the hero. There was a great clash, which laid waste to the land all around them. Some say the battle lasted for days, others say only an instant. Whatever the outcome, neither Brador nor Karuz were ever seen again.[2][3]

The only known possible Souia-Vey on Dereth is the Apothecary Zongo, traveling companion of Duke Raoul Lascera, and famous for his beer recipes involving Moarsmuck. It is said that Zongo was a witch doctor of Souia-Vey who dabbled in poisons and dangerous distillations.[7]

The Souia-Vey have been described as mercenaries,[5][6][8] bandits,[9] warriors,[4][2][1] and raiders.[8] They seem to have no qualms fighting for both sides in a war, as seen by their history and Elgenia Montani's comment about Souia-Vey being duplicitous.

There are two items mentioning Milantos capturing neighboring Souia-Vey villagers,[2][3] which would imply that the Souia-Vey have at the very least semi-permanent settlements, and at the most full-fledged towns.

Although until recently it was thought that the Souia-Vey bartered or stole their weapons and only possessed rudimentary blacksmithing skills, the Bearded Axes of Souia-Vey have been verified to be Souia-Vey creations.[1]

The Apothecary Zongo is said to be a witch doctor of Souia-Vey,[7] which may imply that their understanding of magic and medicine is more primative than some of the other nations of the Ironsea.

The most commonly used comparison is that the Souia-Vey are similar to Mongolians, as popularized by Nayt al-Yad of Crossroads of Dereth. While there is some merit to this claim, such as the Souia-Vey being known as mounted raiders from the high steppes, Nayt's work embellishes on the facts with fan-fiction.

With the introduction of the Bearded Axe of Souia-Vey, another possible real-world inspiration of the Souia-Vey are the Vikings, as the bearded axe is most commonly associated with Viking Age Scandinavians[10]

The second group are the band of mercenaries named Dread Marauders. They were cast out by their people for brutality and barbarism beyond even the standards of the Souia-Vey.[8]

A map of Ispar (fan-made) 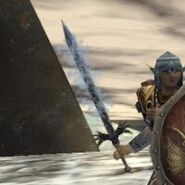 Dread Marauder Shield
Add a photo to this gallery

Retrieved from "https://asheron.fandom.com/wiki/Souia-Vey_Lore?oldid=469772"
Community content is available under CC-BY-SA unless otherwise noted.