There are two Shroud Cabal Quest, the Northern Shroud Cabal and Southern, with similar quest sequence, and similar rewards. 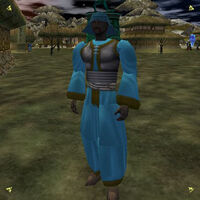 Southern Resonating Crystal
Add a photo to this gallery

Nomendar al-Rakh tells you, "Greetings! Have you run into any human bandits that belong to a group known as the Shroud Cabal? I represent a group of concerned Geomancers who are afraid that these renegades may pose some kind of threat, or represent a new threat to the people of Dereth... If you come across any of their artifacts, please bring them to me and I shall try to reward you."

You give Southern Resonating Crystal Forager Captain's Resonator.
As you hold the resonator against the crystal, a warm, harmonious tone fills the center of the menhir ring, and you feel yourself being pulled gently into portal space...

You give Nomendar al-Rakh Ley Leech's Medallion.
Nomendar al-Rakh tells you, "Very interesting! This medallion can actually be used to directly siphon mana out of a node between ley lines, if one possesses the geomantic skill necessary... Not useful to one such as yourself, you understand, but I have colleagues who would find this medallion to be valuable and informative. All I can do is thank you with some practical experience..."
You've earned 5,000,000 experience.

Retrieved from "https://asheron.fandom.com/wiki/Southern_Shroud_Cabal?oldid=406592"
Community content is available under CC-BY-SA unless otherwise noted.