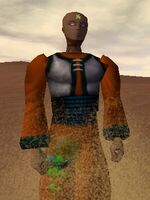 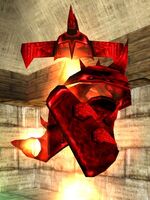 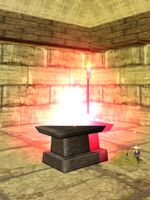 Altar of the Red Crystal
Add a photo to this gallery

You use the writings of the ancient tablet to open this portal.

You decipher the hierglyphs using the writings and instructions from the ancient tablet.
The writings say "Prove yourself by defeating 20 guardians within these catacombs."

Sensing you have completed its test, the altar opens and a crystal staff is revealed.
Altar of the Red Crystal gives you Staff of Red Crystal.

Retrieved from "https://asheron.fandom.com/wiki/The_Crystal_Staff_of_the_A%27nekshay?oldid=470766"
Community content is available under CC-BY-SA unless otherwise noted.