The following players appeared in the server broadcasts that were sent out when each of the bosses were defeated. 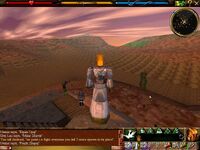 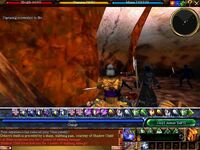 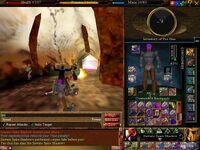 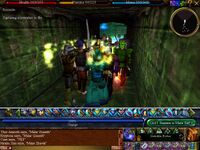 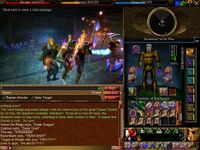 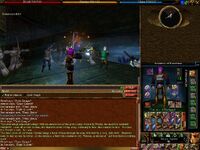 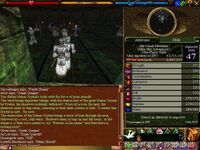 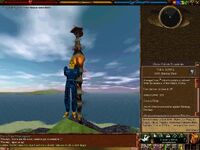 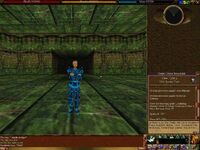 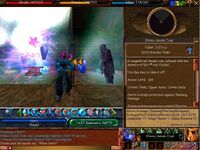 In the dark of the obsidian wasteland, where great magics wrought destruction long ago, the Shadows stir and awaken. The Hand stretches forth once more...

The darkness has been checked in the Northern Direlands. The brave defenders of Fort Tethana have prevailed; [Name of Hero] has slain the Shadow Captain. The tides of war shift...another captain shall appear, perhaps in a different settlement... The dying Shadow Captain cackles, the hateful sound echoing from the walls of Fort Tethana. "You may have sent me to my doom, [Name of Hero], but the generals are here, and they shall see your people weeping in despair."

The Shadows, despite the loss of their Captain to [Name of Hero], have pushed on into northern Oseth, into the Mt. Espar range. Beware, children of Ispar... The ancient terror has come!

The northlands tremble with the echoes of battle, but another Shadow captain has been slain by [Name of Hero]. The Shadows establish a presence in the northern mountains, but otherwise withdraw.... An uneasy peace settles over the land...

The dying Shadow Captain laughs. "Savor this little victory [Name of Hero]. The Generals are come, meat-puppets, and they shall fall upon your puny hovels like a storm-tide!"

A whisper floats upon the wind: From the blasted obsidian plains come Black Ferah's armies. Seek the shadow of Ferah.

It is not Black Ferah's true self, for the Generals do not yet risk themselves thus.

The wind whispers to you: [Name of Hero] destroyed the first shadow of Black Ferah, but that is no hindrance. The Enemy is advancing into the craggy Linvak Mountains, south of the Sho lands.

A whisper floats upon the wind: [Name of Hero] has defeated the shadow of Black Ferah. The Shadow forces press onward, even to the frontier of the lands settled by the Sho. The aspect of Black Ferah will doubtless seek the power within the southern Shadow Spire... Find the portal to that dread construct, where ever it may appear...

The wind brings good tidings: [Name of Hero] has found and destroyed the shadow of Black Ferah! Leaderless, the Shadow Armies melt away. All but the mountains are safe once more. The land is quiet for the moment...

As the shadow of Black Ferah falls, you hear the cold voice say: "A fine attempt, to have reached me within this twisted pathetic creation. Well done, [Name of Hero]. I see I must reformulate my plans.

A whisper floats upon the wind: Ler Rhan has called forth the shadows to the realm of the proud desert dwellers! The first wave shall begin anon.

Seek out the shadow of Ler Rhan who shall arrive soon…the way shall be opened soon.

Only the protective magic of Asheron keeps the darkest Shadows from your precious towns.

The wind brings tidings: The shadow of Ler Rhan has been destroyed by [Name of Hero]! Coolly, the Shadow General moves on to the plains nigh upon the borders of the Aluvian realm. Seek again the aspect of Ler Rhan; he may be reached soon...soon...

The wind brings tidings: The shadow of Ler Rhan has been slain by [Name of Hero]! Ler Rhan has been pushed southward to the realms of the Sho and the Blackmire Swamp. Seek Ler Rhan's shadow; he will arrive soon...

Ler Rhan collapses, but hisses in amusement as he falls: "You may have defeated this shadow of mine, [Name of Hero], but I shall rise up elsewhere!"

The wind brings ominous tidings: The shadow of Ler Rhan has been slain by [Name of Hero]! But Black Ferah has taken up the assault within the Direlands...

Ler Rhan collapses, but hisses in amusement as he falls: "So, you have defeated me, [Name of Hero]. Well played. Yet, I have the aid of Black Ferah, who will now take up the forces in the northern Direlands!"

The wind brings terrible news: While the shadow of Black Ferah has been slain by [Name of Hero] in the Direlands, Ler Rhan has renewed his offensive in the A'mun desert! But a new, cool and quiet undercurrent rides this wind, and it says: Little ones, seek now the Key that leads to the Nexus, and all will be made well!

Black Ferah laughs as she falls. "I have merely bought some time for Ler Rhan to regroup, my sweet [Name of Hero]. How much longer can you humans continue? Our forces are infinite, and you fools still know not our true objective!"

Nexus Shadow says, "It is glorious to fall in the service of Ler Rahn and our Dark Master!"

Nexus Shadow Captain says, "I have failed my lord Ler Rhan... But our Dark Master triumphs even so!"

Destruction of the Nexus Crystal

The destruction of the Nexus Crystal brings a burst of heat through the area, followed by a cool, chill wind. Shadows seem to leap up and fall away...in the distance, a faint voice seems to cry: "Retreat, in his name!" and then there is nothing more"

You flatten Nexus Crystal's body with the force of your assault!

The wind brings important tidings: with the destruction of the great Nexus Crystal by [Name of Hero], the shadows suddenly withdraw! From all across the land, the shadows seem to leap away, returning to their dark corners to hide. It seems that Dereth is safe...for now.

Handing in the Nexus Core Gem for Nexus Armor

You give Alean the Steel Forger Nexus Core Gem.

Alean the Steel Forger tells you, "This is the gem from the core of the Nexus Crystal, is it not? A worthy achievement, indeed. I will make you the greatest suit of armor in Dereth."

Retrieved from "https://asheron.fandom.com/wiki/The_Nexus_Crystal?oldid=460373"
Community content is available under CC-BY-SA unless otherwise noted.