This series of jumps take you to the SW, NW, NE, and SE eyes, in that order. It works well for a wide range of jumping skills. I'm sure a picture of the route would help. 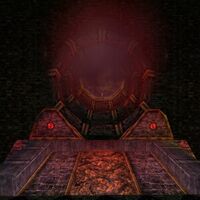 Finn Skigg tells you, "Good day! I see that you're an adventurous sort. So am I, my dear friend! I must admit that I have been in better spirits than I am at the moment, but the sight of another adventurer has caused a smile to spread across my face."

Finn Skigg tells you, "You see, I have just finished a jaunt across and all around Dererth. I managed to make the walk in about eighty days. I've only recently settled here in the pleasantly arid air of Candeth Keep. I had a particularly nasty run-in with some foul undead near the southern entrance of the Valley of Death."

Finn Skigg tells you,"While making my way into a valley, I was accosted by these foul looking undead beasts. They gave me such a fright that I lost a collection of rare plates I'd received from Baron Eli von Schreft back on Ispar. They're priceless, and I would certainly be pleased if someone were to bring them back to me. If you find them, please bring them here."

Guardian tells you, "You have entered the halls of Hizk Ri, the Matron of Pain. Your presence is unwelcome. You have distrubed a perfect order that has existed for eons. What right have you to enter these halls, cur?"

Guardian tells you, "Do not answer. Your presence marks a return of the ancient ways. You shall be tested and if not found wanting, you shall find your way to the seat of the Matron's power and wake her from her slumber."

Guardian tells you, "I pray that you fail, for power such as Hizk Ri's should never be loosed upon the world. We have suffered for millennia under her cruel wiles."

Guardian tells you, "The pillars scattered about the room are devoted to the bodies that hang in the sky above. A riddle seals their secret and bars entrance to the halls beyond. I shall issue this riddle after this final warning: return to me for judgment only when the riddle is solved. If you fail to do so you will be struck dead where you stand. If you return to me with only half the puzzle solved you will be struck dead where you stand. You have been warned."

Guardian tells you, "The riddle is as follows: Au, the light of this world, hangs in the east, opposed to star of portent. To the north, the moon run red with blood watches it's twin in the south. Prove your worth, or die trying."

Guardian tells you, "You may advance through the halls of Hizk Ri, Matron of Pain. Be warned, you dwell amongst the hopeless and cruel."

Sealed Door to the Well of Tears

Sealed Door tells you, "You are suited for the halls beyond, the restless dead herein will provide a fair challenge to you and those like you. Any beings weaker than you will not be permitted beyond the second guardian, though they may assist you through this corridor. Such assistance would prove you too weak to live."

Guardian tells you, "Within this well the wayward sister of Hizk Ri was cast beneath the world and bound by vile arts to suffer for all eternity. The restless souls, the make this place their home, have tormented the woman's soul since its imprisonment here."

Guardian tells you, "If you wish to meet Hizk Ri you shall need to garner her sister's tears for me. You will need to collect them in an ancient philter, lost somewhere in this crypt. Collect them from the well and return them to me and I shall then let you pass. Go now and return to me only when you can hand me the phial of bloody tears."

Handing in A Phial of Bloody Tears

You give Guardian A Phial of Bloody Tears.

Guardian tells you, "You have pleased me. I will sup upon the tears of her soul this night and be sated for a time. Prepare for your reward."

Retrieved from "https://asheron.fandom.com/wiki/The_Temple_of_Hizk_Ri?oldid=449791"
Community content is available under CC-BY-SA unless otherwise noted.