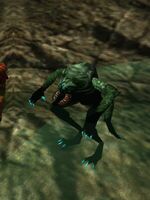 Vargol the Scion
Add a photo to this gallery

Varlanna tells you, "You may be a doughty enough warrior... I'll tell you my needs plainly. I need help to track down Grael. Yes, a tall order, but not as tough as one might think. There are creatures we have had reports of, who might be, ah, enough like Grael to help us track him down. It's a peculiar kind of tracking magic, not well known outside of the Whispering Blade."

Varlanna tells you, "If I had the heads of a Ruschk elder of particularly rarified blood and of a Mukkir Scion, that may be enough for me to start on his trail. Please, first go to the east coast of the Isle of Ruin in the Halaetans and bring me the head of the Ruschk elder called Harrak the White Spear. He is a tough and crafty old fiend, and of surpassingly pure blood, so beware. The White Spear's cave can be found at 93.8 N, 40.1 W. Beware, he keeps a brood of vicious penguins to guard him."

Handing in Head of the White Spear

You give Varlanna Head of the White Spear.

Varlanna tells you, "What a magnificent brute. Almost a pity that he had to die. He was the last of his proud bloodline, you know. Yes, this will help with my tracking methods. Now, if you would be so kind, please journey to Vissidal Island and seek the altar of Grael. Near the altar, at 75.9 N, 69.4 E, is the nest of a powerful Mukkir, who I think would help me with the second part of my tracking technique. Bring me the head of the Vargol the Scion from the Altar Nest, and I shall reward you."

Handing in Head of the Mukkir Scion

Varlanna tells you, "Truly, a fearsome head. This will serve, yes. I commend you for your excellent work and for your courage. Now, the rewards I promised... Practical training, as well as an orb that you may use to recall to this Chaperhouse..."

Varlanna tells you, "You have also earned the right to a Silveran weapon from our most closely guarded stores. Please pick a token representing your weapon of choice from the table behind me."

Retrieved from "https://asheron.fandom.com/wiki/Tracking_Grael?oldid=451813"
Community content is available under CC-BY-SA unless otherwise noted.