"Tufa has never recovered from the dark night in 11 PY, during the Fourth Sending of Darkness, when the peaceful desert oasis town was obliterated by Shadow Spire attacks. Now, the residents huddle around the crater of their town in tents, some cursing the Shadows, others desperately hopeful that some day they will rebuild." --Town Network Sign

Creatures that are commonly found in the area surrounding Tufa.

Ground Zero of the Shadow Spire attack on Tufa 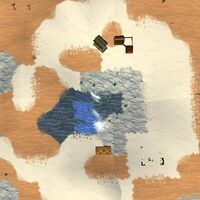 Aerial View on the Crater
Community content is available under CC-BY-SA unless otherwise noted.
Advertisement