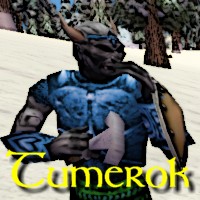 Ralirea sings, "In a distant land my love came to me
Her hair in braid and bow;
And long ago over shining sea
My love was lost in a gate's blue glow.
'Where has she gone?' her mother wails.
'Where has she gone?' she asks of me.
The wind asks 'Where?' in the sails
As ever I search over land and sea.
In a distant land my love was lost.
I seek it still, wherever I go,
through snow and gale and storm and frost:
Just a glimpse,
one more glimpse,
of that gate's blue glow."

Ralirea grasps the small clay figurine that dangles from his neck, and holds it before the flickering light of the fire.

Ralirea pokes the wood of his fire with a stick, and a swarm of embers ascend like fireflies. The hunter watches them, and sighs. "Ever do they fade," he murmurs.

Ralirea looks away toward the distant sea, and murmurs, "Somewhere..."

Ralirea grunts as he swings his harpoon, "[Player Name], I am among the greatest of the Aun hunters. You have little chance against me. Go you on your ways, and leave my party be."

It should not have been this way. [Player Name], go in peace.

The mighty Ralirea sags from [Player Name]'s fatal blow. "Ah, Mirakah," he murmurs. "I shall not be able to fill our stores this winter. But I will meet you at the lodge, my love... at last..." So saying, the hunter passes like the wind over sea.

The relentless pounding of Hea Kanokeh's drum has summoned a nearby Nualuan warrior to join the fight!

As the drum-speaker Hea Kanokeh falls, the Nualuan warriors of Temenua's party lose heart, and quickly leave the field of battle.

Hea Temenua says, "The atual arutoa are my keep and my shield."

Hea Temenua says, "I will walk where the paths the atual arutoa point me toward."

Hea Temenua says, "I will take comfort in the protection of the atual arutoa."

Temenua glances down at the hole that now graces his chest, courtesy of [Player Name]. "Hm," he says, almost offhandedly, as he fingers the edge of the wound. "You were the better. Well played. I pray Tonk will allow me to face you again some day." With this, he carefully lays himself down on the earth, and dies.

Tuperea grins ferally at you, "The atual arutoa have taught me the way to remove and cure the flesh of your kind, prey. You will make a beautiful wrap for my wife."

Tuperea grins ferally at you, "Here, my precious hunters! Bring this prey down, and we shall sup upon its flesh."

The thunder of crushing Manuaka is followed by the deafening silence of death!
Tuperea cries out in dismay as nimble Manuaka falls to your attack!

Huntmaster Tuperea howls in anguish as you release loyal Sahkurea's soul from the prison of her Virindi-augmented body.
You beat Reshalra to a lifeless pulp!
"Reshalra! No!" Tuperea cries as you land a killing blow on the brutish hunting reedshark.

You flatten Hea Tuperea's body with the force of your assault!
Tuperea staggers and falls to his knees. "Ah, my hunters, my precious children. I shall see you again, some day. Take your fill of my mortal flesh, my dears, and may it make you run strong across these fields."

Pillars Made of Sand

Niarltah's voice echoes over the land, "Muldaveus, we must flee. The Isparians have overrun our position. Come Morgluuk and Torgluuk, we will take you to the safety of our hidden fortress. Amanua, Fostok, get in here and clean up this tripe!"

[Player Name] has struck a mortal blow to Amanua. As the Tumerok War Chief falls to the ground motionless, his armor snaps free.

Children of the Prodigal Lord

Hea Rheaga says, "Is there anyone at all like me? Anyone as unfortunate as me?"

Hea Rheaga says, "Oh dear... It looks like death is just as boring as the rest of this uninspiring existence..."

Retrieved from "https://asheron.fandom.com/wiki/Tumerok_Utterances?oldid=445204"
Community content is available under CC-BY-SA unless otherwise noted.