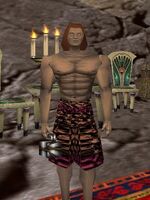 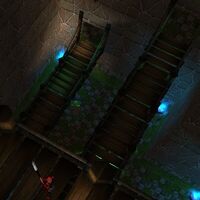 Chest Room
Add a photo to this gallery

Xireri pats you on the cheek, stomps its foot, and shakes its head. You surmise that such actions mean the Golem is hungry, and will only grant you access to the Tunnel of Love in exchange for a Butterscotch Suckling, which can usually be found in the possession of the Stalking Margul who occupy the eastern edges of the Singularity Caul.

Handing in "A Letter From the Heart"

You give Xireri Butterscotch Suckling.

Xireri bows deeply, then wiggles its hand and does a little pirouette. You surmise that such actions mean the Golem is thankful for the Butterscotch Suckling, and has now granted you access to the Tunnel of Love.

Picking up "A Letter From the Heart"

From somewhere up above, you hear the grinding of stone on stone as Xireri grows angry. You feel that perhaps you will not be welcome in these tunnels again. That is, until you appease the golem with some more of that tasty Butterscotch Suckling.

Handing in "A Letter From the Heart"

Surloshen Realaidain tells you, "This... this... this tells me nothing."

Surloshen Realaidain tells you, "I see that look on your face. You think me in denial, don't you? You believe that my mother was crazy, that she obsessed over a man who did not return her affections. But don't you see? This letter proves nothing! Surely he simply refuses to take responsibility for his actions! Asheron is my father! And there is nothing you can say that will make me believe otherwise!"

Surloshen Realaidain closes his eyes and slowly exhales. The shaking in his body subsides as he calms himself down.

Surloshen Realaidain tells you, "I apologize. I should not have raised my voice. You have done me a great service, and for that I should reward you. Please take this helm. It is too heavy for me. My neck hurts when I wear it."

Retrieved from "https://asheron.fandom.com/wiki/Tunnel_of_Love_Quest?oldid=433480"
Community content is available under CC-BY-SA unless otherwise noted.