On this island you will find numerous wonders including Ulgrim's Cottage and his various stolen items and signs as well as his mini Shoushi town sign renamed to Ulgrim's Island. You will also find Ulgrim the Unappreciated and can even obtain a shiny new Casting Stein!


The island where you drop holds Ulgrim's Cottage, with the dungeon Ulgrim's Basement and its many other wonders, and has no creatures.
The other island, with a mini volcano on the west end, holds tons of small golems on a fast spawn, the Ulgrim's Mysterious Hatch, and several Kegs.

Ulgrim's Island can be reached by giving the Drunken Madman in Baishi a Mug of Winter Lager (purchase in Nanto bar).

Drunken Madman tells you, "What's this? It doesn't look like sake."

Drunken Madman tells you, "Oh right, you must want to see Ulgrim. He said people might be looking for him. Ok, I'll portal you there this time, but next time you better bring me sake!"


If you give Sake to Ulgrim in Ayan, he will open a portal that drops you right at the Madman, saving you a bit of a run.

You allow Ulgrim the Unpleasant to examine your Sake.

Ulgrim the Unpleasant tells you, "Ugh! I hate this stuff, but I have a friend who likes it. Maybe you should drop in on him." 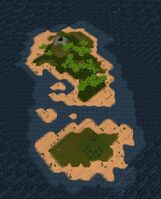 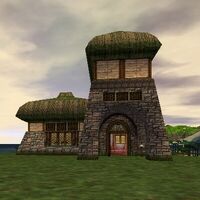 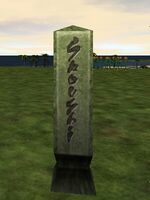 Wheel of Fortune on Ulgrim's Island, he has no clue how he got it... 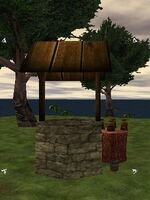 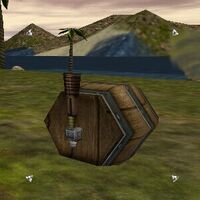 Keg on the golem island 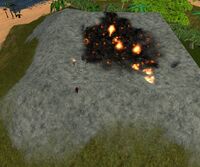 The small volcano with Small Magma Golems on the Golem Island 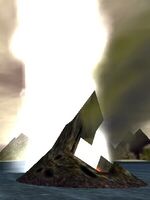 The geyser on the west of the Golem Island
Add a photo to this gallery
Retrieved from "https://asheron.fandom.com/wiki/Ulgrim%27s_Island?oldid=435349"
Community content is available under CC-BY-SA unless otherwise noted.