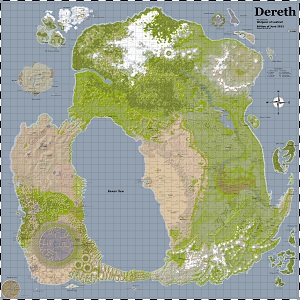 Gawa Ibn Edwas of Solclaim created a big map of Dereth with mansions, villas, cottages, dungeons, towns, lifestones and more labelled on it. This was a 6123x6123 image meant for printing 3'x3'. It looks like he also split this up into 9 and 16 pieces, for easier printing. He last updated his map on 2006-08-06. It is available at http://www.warcry.com/codex/ac/game_info/dereth_maps/.

From an archive of <http://www.thelostcorpses.com/derethmap>:

This website contains information about the Map of Dereth, a highly detailed map of the world of Dereth. Dereth is the ingame world of the MMORPG Asheron's Call. The goal of this map to give an exact overview of all the important items in the landscape - lifestones, dungeons, portals, towns, and so on. The reason to create this map is simple: it's based on "The Map", a map of Dereth hosted by The Crossroads of Dereth. Since this map is rather old (2.5 years) I decided to create my own version.

The data for the map is collected from 2 places: one of the data files of the game (cell.dat) functions as the source for the data to generate the landscape. The location of most items on the map comes from the Crossroad of Dereth Atlas database, which contains information about all locations found on and under the surface of Dereth.

The entire map is generated with my own toolset, written in Java. A part of the code to extract the map from the cell.dat comes from David Simpson's page of Dereth cartography.

I'm working to create an updated version of a big map of Dereth. The hard part is placing the labels so they don't overlap each other, followed simply by verifying the data to make sure it is accurate. Once I have everything updated, keeping the map up to date should be pretty easy as there generally aren't many changes each patch, and the wiki keeps track of the changes.

The big map update announcements by Lothnar seem to be taking place on this thread.

The Map is also available in piece form; 4x4 and 5x5

Retrieved from "https://asheron.fandom.com/wiki/User:Widgeon/Big_Map_of_Dereth?oldid=369972"
Community content is available under CC-BY-SA unless otherwise noted.