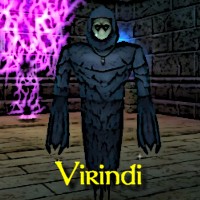 The Virindi (alternative spelling: Virin'di[1][2]) are a mysterious race shrouded by cloak and mask. They are known for their mastery of Planar Magic,[3] their ruthless logic[3], and their experimentations on "meatlings".[3]

The origins of the Virindi are unknown.[3] The only official theory is that they are residents of Portal Space.[3]

No Empyrean texts have been discovered which mention contact with the Virindi prior to The Sundering. Asheron himself has stated that the Virindi arrived on Dereth far after the Sundering,[3] and prior to the arrival of any of the other races.[3][4] Some point after their arrival (it is not clear when) the Virindi fought with Asheron over something and lost.[3][4] The circumstances and cause of the conflict are unknown.[3]

Despite Virindi arriving before all of the other displaced races, it seems as though humanity was not aware of them for some time. This is perhaps due to the fact that humans spent their first 15 years fighting against the Olthoi, a conflict which seemed to take place mostly on Osteth, and as late as 10 PY most Virindi sightings were in the Direlands.[5] The earliest documented human encounter with Virindi is that of Lord Cambarth's meeting and subsequent trading with a Virindi using the Isparian identity of Lord Sarvaen, which occured on Frostfell 4th in the 13th year of Cambarth's Exile and lasted up to Seedsow 22nd, in the 15th year of Cambarth's Exile[6] Throughout Cambarth's Journal, he only refers to Sarvaen as the "Thing" and never as a Virindi,[6] possibly indicating that neither he nor his workers had ever encountered a Virindi before. It is not clear what the conversion is between Cambarth's year of exile system and the portal year system. However, the events with Sarvaen had to occur after 0 PY, since Cambarth had a Gharu'ndim associate named Asjan who was from Qalaba'r, and the Gharu'ndim people did not begin to arrive and settle until after the death of the One Queen.[7]

At some point prior to 0 PY,[8][9] the Virindi discovered the Tumeroks trapped on Marae Lassel.[8] The young Tumerok rebel Aranpuh was the first to be altered by the Virindi (possibly by Aerbax itself[10]) to look more human. After Aran successfully took control of the Hea tribe of Tumeroks and gained the name Hea Arantah, all of his new tribesmen were altered in the same way. At some point after the alteration of the Hea, but before the Hea invaded the mainland (though after 0 PY[11][12]) Lilitha was captured by Hea Temenua on Marae Lassel.[13] She was given to the Virindi, who told the Hea, "Here are the ones we have gifted you in the image of. Behold! We will open Wind and Light to you, that you may go among their holdings. Bring them to us. We wish to understand them, and the one they are protected by."[13]

In the early years after the defeat of the The One Queen[8][9] (the exact date is unknown, some time between 0 PY[8][9] and 7 PY[14]) Tumeroks first began to attack human settlements. It wasn't until Leafcull, 12 PY when Marae Lassel was opened that humans discovered the true nature of the relationship between Tumeroks and Virindi.

The Virindi were one of the parties joining forces to defeat the Ilservian Palacost. At that time, the New Directive was not yet formed.[15] In the month of Frostfell, P.Y. 11, a desperate alliance formed between Asheron, the Virindi, the undead Dericost, a rogue follower of Bael'Zharon named Isin Dule, and the Isparians. The Virindi refused to give up the Fragment of the Singularity, which could be used to defeat Bael'Zharon, but the alliance managed to obtain this item anyway. Bael'Zharon was driven off of this plane of existence, but he was not destroyed.[16] [17]

The Rise of the New Singularity

See also the separate article on the Directive and New Directive factions.

In Portal Year 12, during the The Rise of the New Singularity Story Arc, Levistras and other Virindi such as Aerbax and Adirred the Theoretican rebelled against the Singularity, the core of Virindi existence in portal space. They were straining against the constrictions of the race's communal mind, and were largely responsible for the aggression against humanity. They sought ways to free themselves totally from dependence on the “Singularity” – where the race evidently resides – and separate themselves from the shared Virindi consciousness, the “Quiddity.” They called themselves the New Directive and were determined to keep their individuality at all costs.[18][19][20] In the course of the process of establishing the New Singularity, factions split off from from Levistras and his group.[21][22][23][24]

The resulting war between their minions and Virindi forces loyal to the Singularity nearly destroyed Isparian civilization on Dereth. The Singularity sought to wipe Dereth clean of life to ensure that this never occurred again, and the New Directive's goal of creating a New Singularity would have destroyed Dereth as we know it.[18]

In the end, the Virindi were no match for Isparian strength. With the assistance of Ecorto the Lost Director, who was instigated by Candeth Martine[25], Isparians stormed the Seat of the New Singularity and slew Levistras. [18][26][27]

See also the separate article on the Apostate Virindi faction.

After time, the Virindi, under leadership of "The Consul"[28] determined that Levistras failed in its construction of a New Singularity because it was unaware of the spatial and temporal potential of the energy contained within the ore used. Levistras sought to build a New Singularity from imperfect materials. The Consul and its peers calculated that a mass of Aetherium would retain and diffuse portal energy at a rate a thousand times more efficient than Pyreal. It was determined that a large array of Aetherium could serve as the center of critical mass for the New Singularity.[29]

After the Virindi discovered the use of Aetherium for establishing a New Singularity, they called upon their former allies, the Gotrok Lugians, to direct the excavations. Preliminary investigations also revealed that the artifacts at the site containing Aetherium were remnants of a long-thought-vanished race of mechanical entities from an unknown world. The Virindi also believed that, if these entities could be reproduced or reconstructed, they would make superior servitors and guardians. These subverted Gear Knights were seen as a possibility to replace the Renegade Tumeroks and Lugians, since the Renegades were deemed as "too unreliable". [29]

Their mingling with portal space resulted in quite a few notable temporal disturbances.[30] Geraine, Aerfalle and Rytheran cooperated with the Apostate Virindi to disturb the Ley Lines and change the timelines.[31] [32] Together with Ben Ten, Harlune investigated the activities of the Apostate Virindi and Aerfalle's involvement with the disturbances in the ley lines.[33][34]

Edicts of the Quiddity

Edicts of the Singularity

A Journal by Martine

A Near Illegible Note

The Weapons of the Singularity
Aerbax Texts

Mask of the Depths

Visage of the Shadow Virindi
Accessories 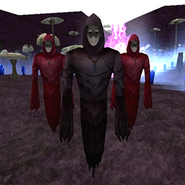 Retrieved from "https://asheron.fandom.com/wiki/Virindi_Lore?oldid=469784"
Community content is available under CC-BY-SA unless otherwise noted.