Leopold tells you, "Anomaly inconsistent with structure. Form devoid of contact. Conclusion, disruption to the Singularity. I must-"

Vincadi tells you, "How did you obtain this artifact? Well, no matter. It can be repaired and used."

Alexander the Deft tells you, "Excellent. Let me have a moment or two to craft the pieces needed to complete this mask. There! A little touch here and there, and it's finished."

Alexander the Deft tells you, "Pwyll's Guard. Wear it with pride. And remember to tell people where you had it crafted!"

Janda Sulifiya tells you, "This will only take me a moment and I think that you will like the outcome. Another twist in the cloth here and yes ... yes, that's it."

Janda Sulifiya tells you, "This Shroud of Night will guard your face from the desert sands and aid you in your travels."

Tsua Kagemata tells you, "A fine specimen. Give me a few seconds here and I will complete a much improved version of my Koji line."

Tsua Kagemata tells you, "I call this one Koji's Fiend. This will serve you very well I think."

Trilaine di Ricard tells you, "An impressive mask, with an equally impressive potential. From this I will craft the Stag of Bellenesse. Duke Bellenesse and his infamous daughter, Eleonora are the root of many tales that I'm sure you've heard by now."

Trilaine di Ricard tells you, "There, the mask is done. Here you go!"

Vincadi tells you, "Yes, it is repaired. Now use it."

Vincadi tells you, "You have done something odd to this. I do not approve."

Alexander's Apprentice tells you, "Interesting. I must say that I am glad to finally be doing something more than second--hand work. Wait a minute! This is something that Alexander didn't want to work with. Perfect! Just perfect!"

Alexander's Apprentice grumbles under his breath. As he grumbles he begins to make changes to the mask.

Alexander's Apprentice tells you, "There! That's the best work I have in me."

Janda's Apprentice tells you, "Ahh, I have been expecting to see some of these soon. I'll be with you in a moment."

Janda's Apprentice begins work on the mask. For a moment the mask looks more like a mummy than a virindi.

Tsua's Apprentice tells you, "Oh great. Thank you. This will be the most fun I've ever had. Let me see gray paint, black paint and white paint. Wow... what an amazing array of colors the virindi use in their attempt to hoodwink us."

Tsua's Apprentice tosses the mask to you. "There you go." 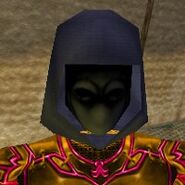 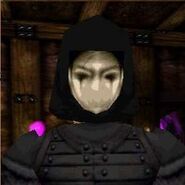 Festivus artwork
Add a photo to this gallery

Retrieved from "https://asheron.fandom.com/wiki/Virindi_Profatrix_Mask?oldid=457174"
Community content is available under CC-BY-SA unless otherwise noted.